The family band has always possessed a genetic magic, gifting its members with a mysterious psychic connection and powerful vocal blend.  AP, Sarah and Maybelle Carter, the founding family of country music, had a profound impact in music through their tight mountain-gospel harmonies and signature sound and that tradition has been carried forward in the bluegrass-country-gospel music of the Cox Family and the Marshall Family Band and followed more recently by The Whites on the O Brother Where Art Thou soundtrack. Next in line is the Southern Illinois-based bluegrass band The Bankesters.

Sisters Emily, Alysha, and Melissa, joined by brother-in-law Kyle Triplett and parents Phil and Dorene have grown from a family that simply enjoys playing music together into a serious band. On their first internationally distributed album Love Has Wheels (Compass 9/24) they shine as vocalists, instrumentalists and articulate songwriters.

Music has always been a family affair for The Bankesters and as the children grew and matured, so did the band. “As dad, I’d been leading the band, but I’ve been trying over the last 2 to 3 years to step back from running everything,” says Phil Bankester. “Everybody gives their input.” Love Has Wheels is all collaboration – from song choice to arrangements to adding harmonies to each other’s tracks. Though all family members sing and contribute vocals here, they’re also adept instrumentalists in their own right: 2012 IBMA Momentum Vocalist of the Year Emily contributes fiddle and claw hammer banjo, Alysha plays the mandolin and Melissa holds down the upright bass. Kyle Triplett is the multi-instrumentalist of the group, playing banjo, guitar and tenor guitar parts while Phil and Dorene hold down rhythm guitar duties.

With the help of producer Alison Brown, The Bankesters invited a few select players to join them on the album, including Sierra Hull on mandolin and harmony vocals, longtime family friend Josh Williams on vocals and guitar, Rob Ickes on Dobro and Jim Hurst on guitar.  Working with Alison helped the band push their talents to the next level. “In a very encouraging way, she just tried to pull things out of people and then help them finesse it,” says Phil. “She could see what was there and helped draw it out, especially with Alysha and Emily – they would say ‘I can’t do that,’ and she said ‘Yeah, you can.’”

While the band was responsible for the majority of the song selection, it was Alison that brought “The Cup Song” to the table, and it quickly became a favorite for Emily and Alysha. The song (made famous in the teen movie Pitch Perfect as main character Beca (Anna Kendrick)’s talent show audition piece) goes back to that first generation family band – the original title of the song is “Will You Miss Me When I’m Gone” and the original copyright belongs to AP Carter. With its playful rhythms (contributed by Kenny Malone), viral melody, and deep roots, the Bankesters quickly brought the song back to bluegrass with their own spirited rendition.

Oldest sister Melissa contributed two new songs to the album, including “Time and Love” written on a sleepless night trying to put her baby to bed, and “Found,” a song written for the organization This Able Veteran, a group that returns hope to injured veterans and their families by providing them with service dogs. The song cleverly juxtaposes the heart-wrenching perspective of the veterans and the rescued dogs: “Even though I’ve walked through the valley of the shadow/ Somehow I’m not laying in the ground/Lonely and abandoned you restored my needy soul/ Taking what was lost and now I’m found.”

The band demonstrates its bluegrass prowess on the album’s opening title track “Love Has Wheels” with Kyle’s driving banjo lines guiding Melissa’s voice until she’s joined by Josh Williams to tell the story of a fiery romance that won’t wait for anything. “Storms” is a quick-paced song about resilience in the face of adversity where Emily, Alysha and Kyle all adding tasteful instrumental touches.  The song Phil sings, “She’s A Stranger,” hits so close to home that initially he didn’t know if he’d be able to sing it. “That’s my parents’ story, except that’s my mom that’s got the Alzheimer’s and Dad is the one who’s been there every single day with her.”

The album-closing gospel quartet “Rise Up,” featuring the unique swampy fingerstyle picking of guitarist Jim Hurst, is a breath-taking testament to the power of family harmony.  “When the kids were born they were always hearing music and they were singing almost from the time they could speak,” says Phil. “They were singing harmonies with each other without knowing even what they were. If one person started singing a song the others would sing harmonies for them and over time everybody learned to develop their own lead voice and everybody learned how to sing the other harmonies. It was a very organic development.”

There’s a maturity that has come with that organic development; the little girls have grown into gifted young musicians. With their new album Love Has Wheels and the ties of family leading the way, The Bankesters are not only poised to break on the national scene but have also begun writing the next chapter of the book on the legacy of family bands in bluegrass music. 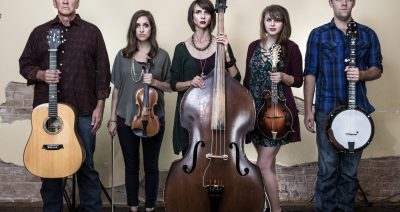