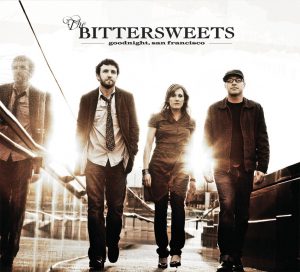 Dusk is a bittersweet time of day. There’s no other point in the sun’s arc that captures the imagination quite like it. Maybe the Nashville-based alternative folk-pop trio the Bittersweets can’t literally splash a sunset across the sky, but they can bring the same striking contrast of shadow and luminescence to the ears.

The Bittersweets—Chris Meyers (guitar, keyboards, vocals) and Hannah Prater (vocals, guitar)—live up to their name. They fuse yellows and blues, sunniness and melancholy, with evocative lyrics and lush arrangements, transcendent melodies and Prater’s alluring voice. On every track of their new album, Goodnight, San Francisco, their recent live set, Long Way From Home, and their 2006 full-length debut, The Life You Always Wanted, the Bittersweets weave a captivating tension between hope and poignancy that rings true.

“I think the name fits us because a lot of the songs talk about life’s tensions and that you can’t just have happy or just dwell on the sad,” Prater explains. “I feel like a lot of the songs embrace both, the beautiful and the ugly, happy and sad—life’s paradoxes.” And the Bittersweets are well-equipped for that sort of musical alchemy.

There’s a reason why Prater’s singing is such a satisfying pleasure. Both of the California native’s parents are music teachers; she sang in jazz groups and musical theatre productions; and she pursued a degree in vocal performance before discovering a different style of vocal expression in Joni Mitchell and Over the Rhine. Prater drew the best from each approach to hone her sumptuous vocal instrument.

“Hannah has so much vocal control,” says Meyers. “That’s a rarity for pop
vocalists. The technical stuff just seems like second nature to her.”

Before the Massachusetts-born Meyers ever picked up a guitar in his late teens, he was an accomplished jazz pianist. His musical epiphany came during college. As he dug into the history of American roots music and wrote at length about how country music made its way from front porches to radio airwaves, his musical palette was forever changed. Of his college studies, Meyers says, “They turned me on to a bunch of artists that I never really listened to before—everything from bluegrass to Johnny Cash or Gram Parsons, the whole spectrum.”

Meyers is the Bittersweets’ primary songwriter. He crafts poetic, often abstract lyrics and the kind of melodies that send shivers of sensory pleasure down the spine. “He keeps everything so interesting,” says Prater. “He keeps me thinking, he keeps me on my feet and having to interpret, and that’s something I’ve always loved to do.”

The chain of events leading up to Goodnight, San Francisco reads like a fairy tale. Meyers and Prater discovered their musical kinship in the Bay area after college. The manager of a teenage musician Meyers was tutoring got the Bittersweets’ demo into the hands of taste-making San Francisco station KFOG, and KFOG’s instant embrace of the Bittersweets built so much buzz that 200 people came out for their very first show—on Superbowl Sunday, no less. By only their third performance, the head of Virt Records was flying in to see them, and their first record deal soon followed. When the band arrived in Nashville two years later, Compass Records was ready to sign them the moment they breathed a word about starting a new album.

Goodnight marks the end of the Bittersweets’ season in San Francisco and the beginning of a new one in Nashville with a leaner lineup (the Bittersweets recorded The Life You Always Wanted as a quintet). “Basically we were all going through various personal struggles the last year we were there, even as a band,” says Meyers. “One of the band members went to law school and another one had a baby—both of which are wonderful things.” But that meant shifting from their five-person lineup—which included bassist Daniel Schacht and multi-instrumentalist Jerry Becker—into a duo, a change that’s ultimately made the Bittersweets even more versatile.

The album’s title track, a slow-burning R&B ballad, captures the bruising and beauty of embarking on a new journey as no one but the Bittersweets can. It eases in with piano and Prater’s breathy lilting and swells into a full-band catharsis, stoked by B-3 organ and an eruptive guitar solo. The lyrics move between past and future, pain and hope: “Goodnight all you dreamers / Goodnight all you refugees of hope / Get on home, it’s getting real late / And time stands like a chorus calling my name out loud / from behind the curtain / The voices in my head say, ‘You’re gonna be a rock and roll star, someday.’”

The fine-grained meditation “When the War Is Over” is another song that
captures the uncertainty of change with devastating accuracy, picking up the story after the leap has already been taken. Like many of the songs on Goodnight, there’s a question ringing at its core: “When the war is over/is it ever over?”

Just like dusk, the Bittersweets’ songs have a stirring, not-neatly-sewn-up
quality that’s hard to shake. And that’s just the point. Says Meyers, “I think art is at its best when it’s asking questions rather than giving answers.” All Of Our Hands Always There To Keep Time Ballad Of A Mourning Dove