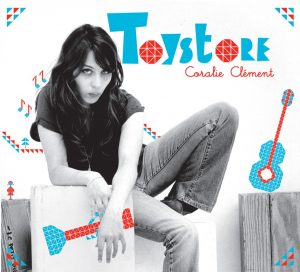 Coralie Clément was born into a family of musicians. Her father is a clarinet player and he brother Benjamin Biolay, also a singer, has written for Henri Salvador and wrote and produced her own debut, as well as its follow-up. Among her claimed inspirations are Françoise Hardy, Jane Birkin and Serge Gainsbourg. She recorded her first album while studying history at university. Clément sang the song  “Dorénavant,” used as the theme of the film L’Idole by Samantha Lang, starring Leelee Sobieski as well as the song “Samba de mon cœur qui bat” used in the soundtrack of the movie Something’s Gotta Give starring Diane Keaton, Jack Nicholson, Amanda Peet, Keanu Reeves and Frances McDormand. She released her first album in 2001, Salle des Pas Perdus which was a collaborative effort between her and her brother. Her second album, Bye bye Beauté, was released in 2005 and took more of a pop spin.