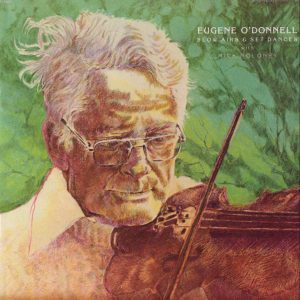 Derry-born fiddler and renowned Irish step dancer Eugene O’Donnell is particularly well known for his vivid, riveting slow airs. The TCRG and ADTCRG (listened Irish dance instructor and adjudicator) began Irish dancing at the age of three, and was the first Irish dancer ever to dance on television in London at the age of twelve, all the while playing and perfecting Derry-style Irish fiddling.

As a teen, O’Donnell won an unprecedented five consecutive All-Ireland dancing championships, and in 1957, he moved to Philadelphia, where he has continued to promote the Irish arts. As a young man, O’Donnell frequented The Commodore Barry Club (The Irish Centre) in Philly. Six months after several Irish societies banded together to buy the building in 1958, O’Donnell helped to create a Ceili band that would go on to win the New York fleadh in the mid-60s.