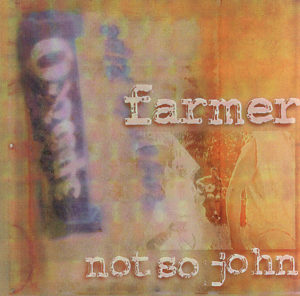 Anything you want to call this is probably fine. It’s dusty rock’n’roll, or alternative country twice removed. Or it’s some kind of dislocated Heartland jangle blended with pathos, power pop and Peter Rowan.

Why Peter Rowan? “Because he’s God,” says Farmer not so John’s Richard McLaurin. “Mack and I worship that guy, and I instinctively knew he would dig our stuff.”

Indeed, Rowan liked the music. Ask him and he’ll tell you. The bluegrass legend sang with Mack Linebaugh and added his distinctive mandola to Receiver’s “Rise Above the Wreckage,” a song whose title is plainly appropriate for a band that has gone in a year’s time from an upstart Nashville quartet with a critically acclaimed self-titled album to a battle-scarred duo with a highly developed stubborn streak and an even better album.

Reasons for the crack-up and restructuring were multifold, predictable and somewhat acrimonious. The short story is former drummer Sean R. Keith became a father and wanted to get off the road. Former bass man Brian Ray had creative issues. Both of them contributed to Receiver. Neither will appear on tour with the band.

Want more biography? Okay. Linebaugh, a Nashville native and Hillsborough High School Class of ’88 graduate, grew up on R.E.M, Neil Young and Bruce Cockburn. He developed an early and ultimately temporary disdain for the country music his father enjoyed. McLaurin was born and reared in the flat, sandy Pee Dee region of South Carolina. He left Clemson University in the mid-1980’s, moved to Nashville without a job, and found touring gigs playing acoustic and electric guitar, lap steel, bass and/or mandolin with Vassar Clements, Maura O’Connell and Iris DeMent.

Then, in 1995, Linebaugh, Ray and Keith formed Farmer not so John. Further direction was established when McLaurin sat in on a practice one afternoon and joined that evening. The band secured a record deal with Compass, McLaurin produced the debut disc, publications from USA Today to Guitar Player took appreciative notice, and the group hopped in a van and began a year of bush league touring in hopes of giving legs to some major league songs.

“It was an odd year,” Linebaugh says. “There would be incredibly low moments of driving a long way for no money and no people. And then we’d go out and play the Bottom Line in New York and have a great response.”

One continuing annoyance was the insistence of some club owners to pair Farmer not so John with rockabilly, hillbilly, and psychobilly bands, as well as other combos of the retro-roots persuasion. The reason for the ill-conceived double bills was a misperception that Farmer not so John was an alternative country band. Linebaugh says this is mostly McLaurin’s fault.

“The only explanation I can think of is that we have a guy that plays steel and mandolin and grew up in South Carolina,” he says. “The whole alternative country thing is so problematic. Are we going to go back and revise history and move the Rolling Stones from Rock’n’Roll to alternative country just because they had some country-influenced songs? We’re a Southern band, but we didn’t grow up on country music, and I defy you to find a traditional country groove or progression anywhere on Receiver.”

Actually, McLaurin says there are three traditional country grooves and 1 1/2 country progressions on Receiver, though he won’t reveal their precise locations. The rest of the album is both a furtherance and a departure from the debut disc.

“We wanted to do a little metamorphosis,” McLaurin says. “This album is darker and more experimental. A lot of that is because of (producer) Tucker Martine, who is a mad scientist if there ever was one. We would do stuff like loop something I was playing on lap steel, using delay and reverb and Leslie effects and lots of tremelo. It ended up sounding real foreboding.”

We’ll skip the other “The Making of Receiver” inside-the-studio type stories, but you’re welcome to ask Mack or Richard about exploding amp cabinets, candle-lit drum booths, canine interruptions or vocal tracks marred by glancing blows from projectiles. You may also pose the “What was it like to work with…?” question as it pertains to special guest pals Rowan, Clive Gregson, Matthew Ryan, Daniel Tashian and Sean Ray.

But before you do any of that, give Receiver a spin. Mash the Repeat button if you like. This is an album textured enough to reward headphone listening and unruly enough for fast cars, high volumes or combinations thereof. It opens with the sweet air, warm wind and possibilities of “Paper Thin,” then takes a harrowing ride through the devastation that occurs when all of the above sour and chill and crumble. And then there are a couple of songs about women…