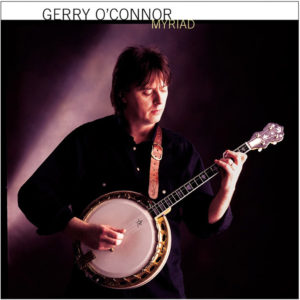 Gerry O’Connor, described by many as the best four string banjoist in the history of Irish music, lets creativity take him where it wants to. He’s been doing this for some time now, and in the process has collected a great army of admirers not only in Ireland but also around the world.

O’Connor’s first U.S. release and Compass debut, Myriad is a musical journey of sorts. O’Connor says, “It is really an album about where I’ve been musically over the past while and most importantly where I am at the moment.” The album contains a wide range of colors, textures and rhythms for the listener to experience. “I haven’t done a solo album in a while. That has given me time to feel and experience a great range of influences, ideas and emotions and they’re all sort of collected here.”

Myriad was recorded over a 5-year period, during O’Connor’s time as a member of the Irish band Four Men and a Dog. The band recorded three albums in that time and toured excessively throughout the U.K., U.S., Canada, Australia and Europe. During his off time from touring that O’Connor entered the studio and put down tracks for the album. “Myriad is definitely influenced by the music I’ve been exposed to on my travels. But I was also aware that I carried inside me the musical heritage of my grandparents, my mom and my dad. So that’s why the last track features tunes with my dad and brother. It’s my effort to give back something of myself to the tradition.” The album features many guest artists including Kevin Doherty of Four Men and a Dog on guitar and Manus Lunny on bousouki and bodhran.

Described by Irish Music Magazine as a “banjoist extraordinaire,” O’Connor has developed a phenomenal technique on the tenor banjo, which sometimes gives the impression that there are perhaps three or four clones of the man all playing at the same time, as is apparent on Cam a Lochaigh (Cam-a-luck-ig). “It just sort of happened. I have no conscious memory of, for instance setting out to develop a particular way of playing triplets. I suppose if you keep at it and it’s inside you sooner or later it will wriggle out from that part of your being where it has been hiding.” Indian Storm was composed in a hotel room in Calgary, Alberta, Canada. O’Connor explains, “I had just witnessed the biggest thunder storm of my life. It was awesome, as you say in America. We don’t get storms like that in Ireland. We have ’soft days’ as they say. I couldn’t help but wonder what it was like for people back centuries ago who didn’t have hotel rooms, or the comforts of the 20th century. I tried to capture that feeling in this tune.”

O’Connor’s family heritage has always played an important part in his love of music and to celebrate that, The GarryKennedy Set became a family event. “My father travelled over 100 miles from Tipperary to Dublin to play these tunes with my brother Michael and me. It was my wish to give something back to him for all the music and encouragement he gave me over the years.”

In the tradition of the O’Connor family, Gerry was presented with a fiddle even before he was old enough to hold it properly. His father and uncles were all fiddle players. “The fiddle I got was too big for me and I couldn’t manage it at all,” he says, “But there was more to it than that. I wanted to be a bit different, sure I loved the music but I wanted to make a sound that was different from the fiddle.” It was this desire that lead him to the banjo after hearing a player from Limerick play at the Barge Inn in GarryKennedy. O’Connor instantly fell in love with the bright, rippling sound and had at last discovered the vehicle that would allow him to make an enormous contribution to the development of Irish music.

O’Connor’s music has been featured on the BBC Series Tacsi and he has appeared as a guest on over 12 albums by such artists as Gordon Duncan and Niamh Parsons. Is he satisfied? “Well, I suppose it is the curse and the joy of the musician and the artist in general. You’re never quite satisfied. I suppose the day I’m satisfied is the day I’ll lay down the banjo for good.”