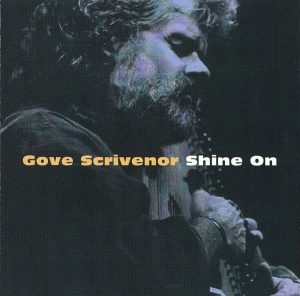 Now joined by John Prine, Nanci Griffith and Lari White for his first Compass Records release Shine On, Gove has created a collection of five self-penned and selected favorites of fellow artists. Gove, once again, introduces songs that are full of life and energy and his very personal, soulful sound.

Gove moved to Nashville in the early 70’s after a four-year stint as a submarine sonar technician in the Navy. This move proved to be a wise one, as he was signed by the largest music publishing company in the world, Acuff-Rose. Wesley Rose saw in Gove the qualities that his struggling TRX record label needed, and Gove was soon signed to a recording contract as well as a songwriter agreement. Things began to happen. Scrivenor signed a management and booking deal with the Don Light Talent Agency in Nashville. During his years with Don Light, Gove toured with fellow agency artists Delbert McClinton and Jimmy Buffett and the Original Coral Reefer Band.

These successes opened doors for opportunities and he was soon performing on the popular PBS series Austin City Limits, where he appeared with The Amazing Rhythm Aces. His performance was splendid and he was asked to return again the following year for a show with Doc Watson. Bookings at colleges, festivals and clubs poured in and Gove soon found himself playing all over the US and Australia. Standing ovations and rave reviews were the order of the day, and then the bottom fell out of the Folk and Blues circuit with the advent of “alternative music” in the early ’80s.

Not one to be brought down, Scrivenor kept his optimistic attitude alive and settled right into Nashville. He established himself as a highly sought after sessions player and he met with continued success by singing many jingles, including the early Opryland campaigns for TV and Busch Beer.

Shine On follows the success of Gove’s two prior releases on Flying Fish Records. Shady Gove featured such masters as Doc Watson, John Hartford, Buddy Emmons and a host of others. It was the first of two highly regarded albums for the label. Coconut Gove, his second release, drew participation from such favorites as Marty Stuart, Ben Keith, and Dave Loggins. Solid Gove was re-released as a compilation on Rounder Records in February of 1998.

Gove Scrivenor’s music has been described as “high energy folk blues,” with inventive slide work and powerful vocals, tempered with singular work on the autoharp and beautiful ballads of his own writing. He’s well know for his magical rapport with audiences of all ages.

Scrivenor has experienced his share of luck, but this time, we’re the charmed ones. We’re provided with another unique opportunity to hear this master at work. To once again experience the thumping of our hearts dancing with joy to the rhythm of his beat.