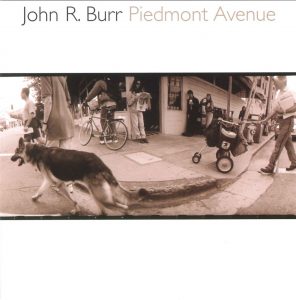 Burr was first drawn to the piano at the age of 10 when he heard Vince Guaraldi’s playing on the Peanut’s animated TV specials. He started out as a child prodigy drummer; he was the only child out of 5 siblings not forced to study the piano. It wasn’t until he was in high school that his focus turned to the keyboard. He then discovered that there were too many drummers to compete with and the piano became his instrument of choice.

After years of touring with such artists as Maria Muldaur, The Alison Brown Quartet, Paul McCandless, Michael Manring and Kathy Kallick and recognition including a feature spot on Windham Hill’s Piano Sampler II, Burr is stepping out with his first solo album, Piedmont Avenue. His playing is as likely to be inspired by James Taylor or Doctor John as by Oscar Peterson or the Yellowjackets although he says it is his love of folk music that has influenced him most. His musical diversity has enabled him to tour and record with a variety of artists and has made him the ideal pianist for the ground breaking folk/jazz group, The Alison Brown Quartet. Burr explains, “I play a sort of jazz piano version of the vocal music that I love to listen to. That’s what influences me. I love to play and study jazz but I listen to vocal, folk/singer/songwriter music. I’m always searching for that melodic song-like quality when I improvise.”

Piedmont Avenue is full of examples of Burr’s musically lyrical style. Burr feels that the seventh track on the album, “Counting the Days”, comes the closest to bridging the gap between jazz and folk. The tune was written with multi-reed specialist Paul McCandless in mind, containing chord changes that are reminiscent of McCandless’ writing and improvising. McCandless joins Burr on this track as well as on Point of Departure. On the lead off track, Burr, a long time Beatles fan, pays tribute to the group with his own take on the classic Lennon & McCartney song, Black Bird. Burr’s unique rendition, playfully titled Black(ened) Bird, incorporates a New Orleans style groove.

Burr’s playing is engaging and his breezy style blending jazz and folk influences makes for a rare and articulate debut album. Piedmont Avenue is cohesive in its conception, inspired in its execution and serves as an excellent introduction to the wonderfully original piano voice of John R. Burr.