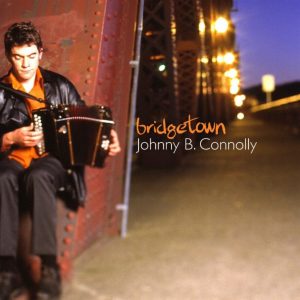 Although still in his twenties, Johnny B. Connolly has already generated a reputation as an exciting and accomplished button accordionist. Johnny’s talents have paved the way across continents and provided him opportunities to perform or record with many internationally renowned artists including Kevin Burke, the Chieftains, Anam, Martin Hayes and Altan. His debut album Bridgetown (Green Linnet) was called “the most exciting solo debut from an Irish artist in years” by The Irish Herald — “a must-have CD for all true lovers of Irish box playing.”

Born and raised in Dublin, Ireland, Johnny has been immersed in Irish traditional music since he was eight years old. By the age of 15 he was a regular feature around his hometown, performing with musicians sometimes twice his age. Johnny’s dexterity on the accordion earned him a slot with established Celtic ensemble Anam at the age of 17. For the next two years, he continued to build his reputation back home in Dublin’s trad music scene and abroad with Anam, touring festivals throughout Europe and Ireland.

In 1996 the 21-year-old Johnny seized an opportunity to bring his skills to America. Leaving Anam, he crossed the ocean to join fiddler Patrick Ourceau in New York for a four-month stint through New York City and Boston. In 1997, Johnny merged his talents with those of guitarist Aidan Brennan, forming a duo that entertained festival audiences across the United States from Alaska to Louisiana to Colorado.

Heading further west, Johnny eventually made his home in Portland, Oregon. A friendship with Kevin Burke, legendary Irish fiddler and fellow Portland resident, led to Johnny’s signing with Green Linnet Records in 2001. His CD Bridgetown, was released to universally glowing reviews. “A joy from beginning to end…Connolly’s playing is skillful and exciting,” wrote All Music Guide. A sparkling collection of traditional Irish and French tunes, the album features guest appearances by Burke and production by guitarist Ged Foley.

Since then, Johnny has toured nationally with such artists as Kevin Burke and Ged Foley, Aidan Brennan, and Casey Neill, and appeared at numerous festivals including Colorado’s Festival of the Mabon (by Planet Bluegrass), the Cincinatti Celtic Festival, and the Sebastopol Celtic Festival in California. He is now a fixture on the flourishing Northwest scene, and his lilting accordion can be heard headlining Celtic festivals or in intimate clubs, joining Irish fiddlers, Gypsy jazz guitarists or Old-timey phenoms Foghorn Stringband.

“This is the most exciting solo debut album from an Irish artist in years…a must-have CD for all true lovers of Irish box playing.” – The Irish Herald

“Bridgetown features the sounds of Johnny B. Connolly’s accordion: lilting, somber, joyful, poignant. Though only 26, the Dublin-born Connolly has a masterly control over his instrument, conveying a range of emotions in 10 jigs, reels and songs.” – The Irish Echo

“Johnny B. Connolly is among the best young players. Bridgetown is a delightful splash of jigs, reels, a slow air and even a whimsical, Paris-flavored musette.” – Goldmine

“A slow burning collection, preferring to insinuate itself beneath the skin than trumpet its arrival from the rooftops. Connolly’s button accordion skills are refined by a canny ear and a keen eye that revels in the tunes, which tilt at an angle instead of ploughing the middle ground…A beauty.” – The Irish Times, Dublin

“At 26, Connolly is clearly a master of the box accordion’s many possibilities.” – Victory Review

“The solo debut from this fine 26-year-old Dublin accordionist is a joy from beginning to end…Connolly’s playing is skillful and exciting, but never showy — he focuses on the tunes themselves rather than on his own virtuosity, and the tempos are generally modest and the ornamentation minimal, an unusually mature approach.” – All Music Guide

“A meticulous player, following well planed and measured routes through all the tunes.” – The Living Tradition, Scotland