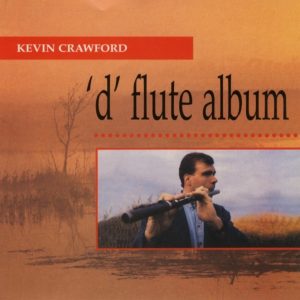 “If it’s music you want,” Christy Moore sang, “then go to Clare.” In 1989, flute, tin whistle, low whistle, and bodhrán player Kevin Crawford heeded those words. He left his hometown of Birmingham, a bustling industrial city in west central England, for rural West Clare. “One reason I moved was to up my game musically and get a bigger exposure to the tradition where it originated,” he explained. “I never intended tomake it a permanent move, but I’ve been living here ever since.”

What made Kevin’s decision to stay easier was the welcome he received from other musicians. “I knew I had been accepted into the traditional world of music,” he recalled, “when Conor Tully phoned me up and asked me to play in a session with him.” Kevin performed regularly with him at the Hill Bar in Kylebrack, East Galway.

Conor isn’t the only fiddler on Kevin’s new CD, the aptly titled In Good Company (GLCD1211) , who valued Kevin’s participation in sessions. For a couple of years, he played with Tony Linnane throughout Clare. Kevin also performed with James Cullinan in sessions in Lissycasey and Doolin. And for nearly five years, Kevin played beside Tommy Peoples in a Sunday morning session at Cruise’s Pub in Ennis.

“When I first moved to Clare,” Kevin said, “Tommy was doing a regular Tuesday night session at Brogan’s Pub in Ennis. I used to go in and listen, not play. At that time I was living in O’Callaghan’s Mills, East Clare, and I felt I needed to move into Ennis. I wound up staying in Tommy’s house. He actually gave me my first car, a Ford Cortina that hehad. ’You’ll need it for the sessions you’ll be playing,’ he told me. In every respect, Tommy is the most generous musician I’ve ever come across.”

Such musical friendships formed for Kevin almost from the moment he showed a singular talent for playing in Birmingham, where he was born on December 6, 1967. Both his parents had immigrated from Miltown Malbay, Clare, bringing with them an ardent love of traditional music. Kevin’s father, Patrick, often sang songs and whistled tunes around the house, while Kevin’s mother, Mary, would whisk him, his two brothers, and his sister back to Miltown Malbay for music-filled summers. There he heardsuch masters as P. J. Crotty on flute, Seán Talty on pipes, and Eamonn McGivney on fiddle.

While on holiday in West Clare, Kevin also heard a duo that profoundly shaped his outlook on Irish music and, not coincidentally, this album. “The first memory I have of Irish traditional music being played live featured a flute player and a fiddle player: Josie Hayes and Junior Crehan. It was a sound I always associated with Irish music, and Ithought it was the perfect instrumental combination.”

Josie Hayes came from Coore, not far from the home of Kevin’s mother, while Martin “Junior” Crehan hailed from Bonavella, near the Crosses of Annagh. Both had played together in the famed Laictin Naofa Céilí Band, who included legendary piper Willie Clancy. The inspiration of this Miltown Malbay-based céilí band can be heard in Kevin and Martin Hayes’s rendition of The Bag of Spuds, a reel Kevin learned from the Laictin Naofa’s 1960 LP, Come to an Irish Dance Party.

Back in Birmingham, Kevin was additionally influenced by the harmonica playing of his uncle Michael, the fiddling of Pat Molloy from Connemara and Tony Neylon from Clare, the accordion playing of Brendan Boyle from Fermanagh, and the flute playing of Patsy Moloney from Limerick. Later on, Kevin played Irish music with Joe and Enda Molloy, Pat Molloy’s sons, and with Mick Conneely, a fiddler born in Bedford, north of London. Kevin, Mick Conneely, Brendan Boyle, banjoist Joe Molloy, Cork-born vocalist Bernadette Davis, and transplanted Parisian guitar and bouzouki player Ivan Miletitch eventually founded a group together, Long Acre. They performed at folk clubs throughout England and also cut an album. The band grew out of the many marathon music sessions organized by Miletitch. “He had this old van we’d all pile into, and asmany as twelve of us would get in,” Kevin remembered. “We never knew where we’d wind up: Newcastle, Scotland, Belfast. The sessions would often last for days on end.”

The music itself was of a high standard. “When you’re born and living in England, you sometimes feel your music may be a bit inferior to what’s coming out of Ireland, and you may not think you’re as good as the musicians there. But, funny enough, one of the reasons the music is so strong in England and in the U.S. is that you work twice as hard atit because you feel you have to.”

Kevin also appeared on such albums as Maiden Voyage (1991), recorded at Pepper’s Bar in Feakle, Clare; The Sound of Stone: Artists for Mullaghmore (1993); The Sanctuary Sessions (1994), recorded at Cruise’s Pub; Seán Tyrrell’s Cry of a Dreamer (1994); and Musical Travel Ireland (1994) on the French label Silex. More recently, he’s guested on Joe Derrane’s The Tie That Binds (1998).

In 1993 and 1998, Kevin joined, respectively, two of Ireland’s most celebrated instrumental bands, Moving Cloud and Lúnasa. With the former, he made two exceptional albums for Green Linnet: 1995’s Moving Cloud (GLCD1150), named best recording of the year by New York City’s Irish Echo newspaper, and 1998’s Foxglove (GLCD1186). With Lúnasa, he made another superb Green Linnet release, 1999’s Otherworld (GLCD1200) , also singled out by the Irish Echo as that year’s most outstanding album; plus the Lúnasa recording The Merry Sisters of Fate (GLCD1213). His involvement with each group has brought him the wider international recognition he richly deserves.

Following his acclaimed solo debut in 1994, ’D’ Flute Album (GLCD1162) , also available on Green Linnet, Kevin has now made his most personal, heartfelt recording to date, In Good Company. “I wanted to reintroduce myself to the musicians I played with when I first came over to Clare and to the tunes we used to play,” he said, describing the album’sgenesis. “When I’m away from home, these are the musicians I miss the most, the ones I sit on the tour bus or the plane wishing I was back in Clare playing tunes with.”

To satisfy his longing, Kevin recorded some old CDs, LPs, and session tapes onto mini-discs and brought them on tour. “I’d be sitting in the back of the tour bus playing along with the mini-discs,” he said, “but I knew there couldn’t be any integration or sparks flying compared to actually being in a session. That’s when the notion of this album really took root. I thought the only way to get the job done was to find some of the old material I used to play, draw on some of the new tunes I liked, and try to get together some of the musicians I’ve always loved playing with. In many ways, this is an album of heroes of mine.”