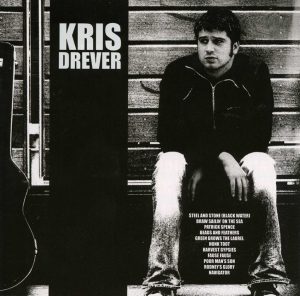 Orkney-born and son of singer-songwriter Ivan Drever (Wolfstone), Kris Drever emerges from within the surging folk scene with Black Water, a debut album that is “as marvelous as it is timeless.” (Maverick) . Produced by John McCusker and featuring constant conspirators and collaborators Kate Rusby, Donald Shaw, Roddy Woomble and Eddi Reader, Black Water gives a modern washing to folk standards such as “Braw Sailin’ On the Sail” and “Patrick Spence”. “I like either to do songs that haven’t been covered much before,” Drever says, “or folky standards that are open to a different interpretation. I try to steer clear of that kind of typical folk-singer sound, and put my own mark on things.”

Drever admittedly spent most of his youth listening to Metallica and Pantera, all the while learning the guitar and ruining other people’s sessions at the Orkney Folk Festival. At seventeen, Drever left home for the mainland, eventually gravitating towards Edinburgh’s burgeoning session scene and The Tron Ceilidh House, which was then (late 1990’s) the place to be. It wasn’t long before Drever was a regular at this Scottish musicians haven, playing several nights a week.

After a temporary switch to the double bass, Drever subsequently returned to the guitar and began honing his highly individual style – a blend of rhythm and harmony, folk, jazz, rock and country inflections – that now finds him in near-constant demand as a session player. Drever’s earlier live and recorded work includes collaborations with Cathy Ryan of Irish-American supergroup Cherish the Ladies, Scottish fiddlers John McCusker and Bruce MacGregor, Irish accordionist Leo McCann and Gaelic band Tannas, as well as tours of the US and South America with the Irish dance show Celtic Fusion. Drever was also a member of the highly acclaimed trio Fine Friday which released two albums on the Foot Stompin’ label and toured the UK, Europe and Australia before the three went their separate ways to concentrate on individual projects.

In February 2007, Kris Drever was honored with the prestigious Horizon Award at the 2007 BBC2 Folk Awards. Drever recently toured the UK with Eddi Reader and Roddy Hart and will release an album with the band Lau (Aidan O’Rourke on fiddle, Martin Green on accordion) on Compass Records summer 2007.