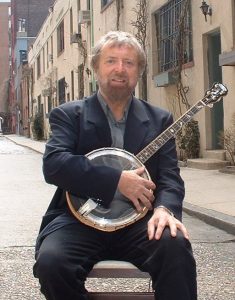 “No one has succeeded more in taking this once vital part of Irish American culture out of musty archives and moldering dissertations and placing it afresh on CD and concert stage than Mick Moloney.” – Earle Hitchner,The Irish Echo

Musician, singer, anthropologist and musical historian Mick Moloney celebrates the joyous and creative era in American popular song from the early 1890’s to the end of vaudeville and the start of the Great Depression on his new release If It Wasn’t For the Irish and the Jews. Each of the album’s 14 tracks is notable for having been created in a collaboration between Irish and Jewish lyricists and composers. Irish/Jewish Tin Pan Alley collaborations were commonplace in the heyday of vaudeville and Tin Pan Alley, and, though there were doubtless the usual business break ups and make ups, these collaborations represent a charming story of decades of good natured ethnic flux, competition and cooperation which left a lasting imprint on the history of American popular music. The end result is a fascinating and highly entertaining look at a historically critical point in American music.
Equally qualified as a musician and anthropologist, Mick Moloney brings the perfect balance of historical insight and musical relevance to these songs. Born in Ireland, Moloney came to America in 1973 and pursued a career that uniquely combines the roles of musician, folklorist, author, presenter, radio and television personality, and educator. He holds a Ph.D. in folklore, and teaches at New York University in the Irish Studies program. Mick Moloney has been featured on Fresh Air with Terry Gross, in the Village Voice and in Irish Music Magazine. He is also the recipient of the National Heritage Fellowship from the NEA, the highest honor a traditional artist can receive in the United States. If It Wasn't for the Irish and the Jews