When Maria Quiles (vocals and guitar) and Rory Cloud (vocals and guitar) met in 2011, both were adrift. Maria had quit her job, given up her San Francisco apartment, and moved in with her uncle in order to pursue music full-time. Rory had left behind a stable schedule of gigs and music lessons in Southern California to seek a new music community elsewhere. He eventually wound up living out of his Toyota Corolla in San Francisco, where he first heard Maria at an open mic. “As a lead guitar player, I could immediately hear myself in her songs.” Rory remembers.

Several years of touring and spending nearly every day together allowed Quiles & Cloud to develop a unique sound—one that is characterized by soulful melodies, close harmonies, and interweaving guitar lines that owe as much to jazz and classical music as to folk and bluegrass. The addition of Oscar Westesson (upright bass) in 2013 pushed them even further as songwriters, resulting in darker, more complex, and more dissonant arrangements.

Their sound has struck a chord with audiences all over the country. Folk Alley has lauded the group’s “continued ability to combine subtle precision with stark grit and creative exploration.” Acoustic Guitar has called them “a compelling new voice on the Americana scene.” Quiles & Cloud have now played hundreds of shows, won the 2014 FreshGrass Duo Award, and caught the attention of GRAMMY Award-winning banjo player Alison Brown—who produced their third album SHAKE ME NOW, which comes out on Compass Records 3/17/17.

SHAKE ME NOW is stripped-down, yet dense. There are musical and lyrical traces of the blues, bluegrass, folk, rock, soul, and classical music. Their songwriting stands out on the title track, “Shake Me Now” as well as the upbeat and hopeful “One My Way Tonight”. In addition to their original songs, there are reinterpreted versions of the traditional blues number “Deep Ellum Blues”, the traditional folk tune “Worried Man Blues”, and Bob Dylan’s “You Ain’t Goin’ Nowhere”. One gets the feeling of being on a widescreen road trip through America’s past and present, with multiple eras and traditions folding in upon each other. The result sounds familiar and roadworn, yet completely new—a quality that Quiles & Cloud share with some of American music’s greatest innovators.

Quiles & Cloud have already traveled far. As they see it, though, this is only the beginning of a lifelong journey—one of exploring connection, deepening their partnership, and examining the threads that tie us all together. 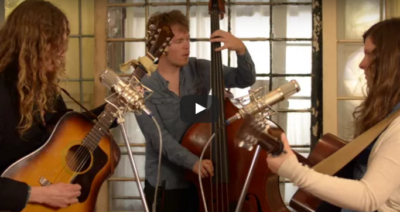 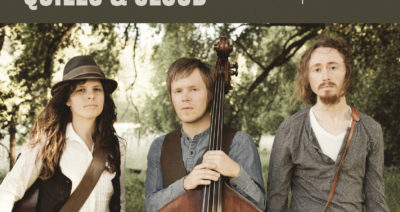 Quiles & Cloud celebrate the release of Beyond the Rain