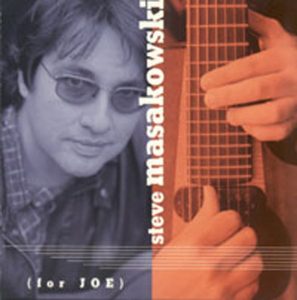 Steve Masakowski has long been regarded as one of the finest jazz guitarists from New Orleans. His experience as a recording artist and jazz soloist is extensive. He has recorded five compact discs under his own name to date, including his latest, For Joe. As a jazz soloist, he has been invited to record on over twenty-six albums as well as accompany many noted jazz musicians including Nicholas Payton, Mose Allison, Dave Liebman and Ellis Marsalis.

Masakowski recorded two solo albums What It Was and Direct AXEcess on Blue Note, both of which received critical acclaim and reviews in major music publications around the world. The prestigious international jazz journal Downbeat Magazine awarded What It Was a four and a half star review and honored Masakowski in their criticÕs poll as Talent Deserving Wider Recognition. His music has been featured in major publications such as the New York Times, Washington Post, Chicago Tribune, Downbeat, Jazz Times, and many others. In addition, Masakowski was honored by National Public Radio with a feature biography which aired nationally on the Morning Edition radio program.

Masakowski came to the attention of Compass Records as a member of the celebrated New Orleans jazz group Astral Project which has released 2 albums on Compass. After hearing Masakowski describe the tremendous influence which Joe Pass’ 1964 Pacific Jazz release For Django had on his playing, Compass co-founder Garry West suggested that Masakowski record a similar kind of tribute to the legendary Joe Pass. The resulting album, For Joe, includes a mixture of originals and standards recorded in a trio setting, featuring Bill Huntington on bass and Astral Project bandmate Johnny Vidacovich on drums. The sparse setting allows for Masakowski’s seven string guitar and formidable technique to shine as he pays homage to Pass on tunes like Falling in Love With Love, Pass Presence and For Django, the title track of Pass’ 1964 album.

One of the highlights of MasakowskiÕs 25 year old performing career is a two-year tenure with the jazz ensemble headed by Grammy nominated vocalist Dianne Reeves.Kennedy Center, Carnegie Hall, The Superdome and The Newport and JVC jazz festival They toured extensively throughout Europe, North America, and Japan and made numerous national television appearances on shows such as Good Morning America and NBC Weekend. With Dianne Reeves he had an opportunity to perform at the most prestigious concert halls and festivals around the world.

As a member of the award-winning 22 year old group Astral Project, heÕs recorded two cds: Elevado and VoodooBop, both on Compass Records. The group has also completed several successful European and North American tours, and has had featured performances aired on the Bravo Channel and NPR. In 1999, Astral Project toured with jazz vocalist Bobby McFerrin performing at several major festivals and venues around the country.

Steve Masakowski teaches Advanced Jazz Harmony and Theory, Jazz Guitar and directs the Jazz Guitar Ensemble at the University of New Orleans. He studied jazz arranging and composition at Berklee College of Music in Boston and studied composition and orchestration with Dr. Bert Braud in New Orleans.