Adam and David Moss began hearing Everly Brothers comparisons long before they officially joined their voices together as folk duo The Brother Brothers. But not even the late Phil and Don Everly, one of the greatest DNA-sharing duos in modern music history, could claim the kind of vocal symmetry Adam and David create. Harmonies just don’t get any closer than those sung by siblings who came from the same egg.

The twins, raised in Peoria, Illinois, weren’t much older than toddlers when they started singing along to the Everlys, The Beach Boys, and other artists their dad played for them. Lulled to sleep nightly by The Beatles’ White Album, they made up their own harmonies to accompany Paul McCartney’s vocal on “I Will” when they were 6.

That song was one of the first they chose for their third Compass Records release, Cover to Cover, on which they pay homage to formative influences and favorite songwriters with a mix of beloved classics and songs they want more people to hear — each filtered through the brothers’ unique musical mix of folk, bluegrass, jazz and other idioms.

Among their eclectic picks: Tom T. Hall’s “That’s How I Got to Memphis,” Jackson Browne’s “These Days,” James Taylor’s “You Can Close Your Eyes,” Hoagy Carmichael’s “I Get Along Without You Very Well (Except Sometimes),” Robert Earl Keen’s “Feelin’ Good Again,” Richard Thompson’s “Waltzing’s for Dreamers,” Judee Sill’s “Rugged Road” and Tom Waits’ “Flowers Grave.” They also chose Harley Allen’s “High Sierra,” popularized by Dolly Parton, Emmylou Harris and Linda Ronstadt on their Trio II album, and “If You Ain’t Got Love,” by Chas Justus of Lafayette, Louisiana dance band the Revelers.

Of course, they didn’t just choose tunes based on popularity or admiration. Each has a story, a connection. Some, like “I Will” and “Feelin’ Good Again,” represent fond memories — the latter of their years in Austin, Texas, during which they caught many REK shows when they weren’t performing (Adam in Green Mountain Grass and David in Blue Hit). Others, like “That’s How I Got to Memphis” and “Rugged Road,” were discoveries, products of their own or someone else’s rabbit hole dives.

They’re not just casual scholars, either; both hold music degrees from the University of Illinois Urbana-Champaign. Their formal music education began when they entered an arts magnet school, where they started studying piano and violin in second grade.

“David switched to the cello in third grade because he didn’t want to be playing the same instrument as me,” Adam relates. “We wanted to learn other stuff, but our mom was pretty adamant that we not play horns in the house. No drums.” (He still holds that against her, he jokes.) David has since added guitar; Adam plays violin/fiddle, keyboards and banjo, though Cover to Cover features Alison Brown’s banjo work.  It also features Lake Street Dive vocalist Rachael Price and her sister, Emily, on “I Get Along Without You”; Sarah Jarosz, who plays mandolin on fellow Texan Keen’s song and harmonizes on “You Can Close Your Eyes”; Jarosz’s bandmate, Jeff Picker, who plays lead acoustic guitar and bass on “These Days”; and Michaela Anne, who adds high harmonies to “High Sierra.”  The Brother Brothers have toured with Lake Street Dive and Jarosz, as well as Keb’ Mo’, Shakey Graves, Big Thief and others. But in several cases, their collaborations grew from friendships first. They’ve made many while following each other to Austin, Boston and New York.

For six of his 10 years in the Big Apple, David shared a house with Lake Street Dive bassist Bridget Kearney. That’s where the brothers figured out they should quit “orbiting around each other” and actually come together as a musical unit. After releasing their first EP in 2017, they signed with Compass. Both their 2018 debut album, Some People I Know, and 2021 follow-up, Calla Lily, earned wide praise and a large streaming audience.

The thoughtful selections and beautiful arrangements on Cover to Cover will undoubtedly earn them more — as well as comparisons to contemporaries the Milk Carton Kids and Secret Sisters (the twins like to mention David Rawlings and Gillian Welch as reference points).

Surprisingly, they didn’t have a hard time deciding which songs made the final cut. According to David, “These are other people’s songs, but we really needed to make them our own. We didn’t want to be singing somebody’s song that we didn’t fully identify with and didn’t feel like us. In the end, we just picked the ones that we enjoyed doing the most.”

Some of that decision-making occurred long-distance, after both chose to escape New York rents during COVID. David and his fiancée bought a camper and traveled until she was offered a job at Miami City Ballet School. Adam’s then-new girlfriend, who had just moved to the city and didn’t know many people, suggested hanging temporarily at her mom’s place in Santa Barbara, California. But they liked the vibe so much, they stayed.

As for how they got to “…Memphis” — and the rest of these songs, they traveled some interesting routes. Adam did a deep Tom T. Hall dive after hearing some of Americana’s most revered singer-songwriters praise him during a song-pull performance. He wasn’t all that moved, but years later, David discovered “That’s How I Got To Memphis.” Then Adam started hearing it everywhere, and got hooked.

“It’s so well written and so meaningful,” David says. “It’s everything a country song should be.” Their slightly more upbeat version has a soulful, bluesy groove.

Regarding “These Days,” on which they mesh crystalline harmonies and gorgeous guitar interludes, Adam says, “This song is possibly the reason we got together as a duo. We soundcheck with it every show, and drive down the road marveling at the fact that Jackson Browne could have written this song with such a wise sentiment at such a young age.”

Adds David: “I was watching some St. Vincent videos and heard her doing Nico’s version, and I was just so transfixed. So I set out to learn it, but I learned St. Vincent’s version. Then I heard Nico’s and got super into Jackson Browne — not that I hadn’t already been. But I probably heard the original long after I’d heard about five different other versions. So this is kind of a conglomerate.”

Ryan Scott’s slide guitar gives “You Can Close Your Eyes” a slightly mournful vibe, appropriate for a line like “you can sing this song when I’m gone” — in what they call “one of the greatest choruses ever written.”

“If You Ain’t Got Love,” a rock ‘n’ roll jam with a twang and straight-outta-Memphis Wurlitzer electric piano, is included because they love the band. “What’s a cover record without a song by one of your friends?,” they note. “This one transports us to the two-stepping dance parties we’ve come to love and miss.”

After a friend turned them on to late songwriter Judee Sill, the pair became obsessed. Though they found “Rugged Road” a challenge to make their own, they wanted to recognize “one of the unsung heroes of the female-songwriter ’70s.”

They’re not sure how they came across “I Get Along Without You,” but claim Chet Baker’s version “is a dream — maybe one of the most perfect performances by any musician.” They were thrilled to arrange an a cappella version with the Price sisters.

Of their delightful bluegrass arrangement of “Feelin’ Good Again,” they note, “This song speaks for itself as the feel good song of the century.”

They plucked Thompson’s “Waltzing’s for Dreamers,” delivered with melancholy elegance as a stately waltz, from deep in his catalog. “Thompson songs are so legendary, but nobody I know has heard that song and it’s so beautiful,” David says. “Even if only my friends listen to this album, they’re gonna get to know this song.”

Their older brother recommended “High Sierra” — which proved perfect for third harmonies by their friend Michaela Anne, in a simplified arrangement that give the lovely melody, lyrics and harmonies the emphasis they deserve.

“Blue Virginia Blues,” one of Adam’s favorite bluegrass songs, apparently is also favored by the Punch Brothers’ Chris Eldridge, who would call it out during bluegrass jams they played in New York.  “He has the best taste in bluegrass music of anybody I’ve ever heard,” Adam praises.

They weren’t sure they could do justice to Waits, a major influence, with “Flowers Grave,” but once they created their exquisite violin and cello arrangement, they knew they nailed it. “It’s not the radio hit of the album,” Adam notes. “But I think it’s our smartest arrangement for sure.”

On an album full of so many, that might be debatable. Fortunately, listeners won’t have to choose, because all 12 are sparkling gems. 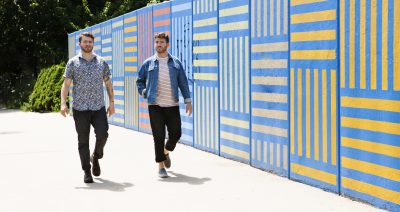 Some People I Know