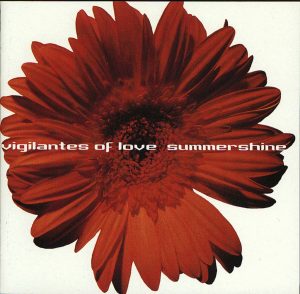 Bill Mallonee, the lyrical and inspirational source behind the Vigilantes of Love, grew up on Brit pop. Around the house he listened to The Beatles, Kinks, and The Who. In the States, a bit later, TV-type acts such as Paul Revere and The Raiders and the Monkees figured heavily into his youthful ’coming to musical consciousness.’ At the time, he played drums and an old set of Slingerland drums with real calfskin heads (that a man gave him for mowing his lawn each summer) were his truest friends. That drum kit and those records cranked to maximum in a dusty basement on some old Sears hi-fi kept Mallonee happy while his parents struggled to keep their own sanity amid the stresses and “soul-sucking strains of hawkish, corporate America.”

He was too young for the hippie thing, Mallonee says, “the extremist idealism of the day seemed a bit overly dramatic, so the Brit movement started to make an impression on me.” The west coast rock scene (the Byrds being a notable exception) seemed to pale in comparison to the love sick glory of a 3 minute pop song (preferably British) that stole your heart with the clang and bang of untempered guitars. The ’essence’ of this was not to surface in Malloneee until he started playing music in Athens in the late 80’s. Mallonee learned guitar quickly and the post-punk-pop of the La’s, XTC, Elvis Costello,the Clash and Squeeze filled his family house. Great college scene bands that passed through Athens, Georgia during that time were Athen’s own R.E.M., the dbs (with the great Chris Stamey and Peter Hosapple), Mitch Easter’s ’Let’s Active,’ the Bongos and Tommy Keane: these were also big influences. Each of those bands proudly wove an indebtedness to the first “British Invasion” into their musical flags.

The strange thing was that somehow Mallonee’s love for Dylan and Neil Young won out (temporarily shall we say) over these early influences. The terrain viewed from the inside of a van for 10 years and over 10 albums by the Vigilantes of Love seemed to lend itself more to the themes of Americana and alternative country….and so they went with it. Until now.

VoL’s brand new release Summershine once again grabs onto those British pop influences, forcefully taking the music of this highly acclaimed Athen’s band forward into the 21st century. Mallonee says, “Three years ago I began making regular trips to the UK to do pub tours and a few festivals. We were greeted with a great deal of interest and outright enthusiasm. Soon two weeks of touring in the UK became 3 months a year with a few solo swings by myself. With the hard work of our manager JJ Johnson and the support of BBC radio sage Bob Harris, we found a new and engaging audience. We enjoyed playing our brand of ’Americana.’ While radio and touring markets here in the States were trying to figure out what to do with the genre, the UK and Europe seemed to be opening up and embracing us.” The funny thing is that while the band thought they were giving the UK something that was theirs, in reality, something quite subtle was being given to them. That something was the resurgence of the joy of guitar pop music. They heard it all around them. In JJ’s collections, in the cafe’s, in the pubs, in the underground, on the trains, in the bands that opened for them on the tours…the glory of current British pop and its predecessors.

Music full of more hooks than a meat packing plant with well ordered big harmonies, jangly guitars and replete with choruses that made you wanna hit replay as soon as the tune was over. It provided for an epiphany of sorts. It was precisely that type of music that made Mallonee want to play in the first place. “Inside myself, it was as if a well of something like affirmation opened….and I followed its course. Previously I had written about 40 tunes on three 90 minute cassette tapes. These were to be the blueprint for the next VOL record to be recorded this year. Me? I bagged those tunes (a sort of son of Audible Sigh) after a 3 week west coast tour in the US in January of 2001. I came home, celebrated 20 years of marriage to my wife and wrote 16 new tunes between Feb.1 and Mar. 1st. Once I stepped back and looked at the results I could see where the inspiration came from: the stream that fed that previously mentioned well were all the experiences I’d had with the band touring in the UK over the course of the last 3 years. The music felt vital, organic and well, happy…full of hope and faith in the power of love to make us something more than we are without it…”

Summershine, the follow up to the band’s highly acclaimed Audible Sigh, was produced by Mallonee and Tom Lewis and highlights the musical talents of band members Jacob Bradley on bass and Kevin Heuer on drums. MIX Magazine called Audible Sigh “exhilarating” and The Associated Press described it as “Excellent!…A brilliant piece of work, a great album that deserves a wide audience.” The album hit #5 on the Billboard Internet Charts and reached #35 on the Gavin Triple A Non-comm charts. Fans of heartfelt melodic pop will love Mallonee’s insightful tunes. Mallonee’s lyrical vision is both original and compelling and VoL’s rough-hewn arrangements perfectly match the sentiments of the songs. There’s melody galore and soaring harmonies, but also true grit. And then there’s love.

And Summershine deals with all of those feelings and emotions. Everyone knows that love casts its broadest web in the spring and summer. That’s when you fall under the spell. Mallonee remembers, “That’s what they told me on the radio and in all those records I listened to as a kid…and so that’s my story and I’m sticking to it.”

VoL has always been proud that they’re basically “just a college band from Athens,GA. That reference point and those elements will always surface in the work. It’s the clang and bang of 12-strings, joy without lock or key, unapologetic…and above all…unafraid.”