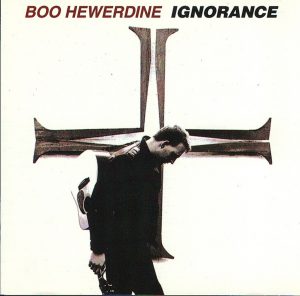 Boo Hewerdine lives in Cambridge, England. He’s incredibly tall. That’s a good thing, because his large frame has to accommodate a massive talent. He’s a singer of real depth and emotion, a musician who can coax a melody out of anything he picks up, and a songwriter who never fails to hit the mark. He has it all.

Boo’s first group was called the Great Divide. Following a couple of singles that made all the right noises (save the ringing of cash registers), the band emulated their name. Undeterred, Boo formed Georgia Peach, which proved to be a pretty silly name for a bunch of Brits. So, they became The Bible. The group played everywhere from student bars to concert halls and went from support act to headliners with almost indecent haste. The music was fantastic: Boo’s voice soared above seemingly effortless grooves. It was pure pop: guitars, choruses you could actually sing along to, and lyrics that spoke to anybody who’d been in and out of love. Walking The Ghost Back Home (1986) and Eureka (1988) were both full of great songs that should have been hits. The latter (produced by Steve Earle) featured Honey Be Good. If ever a turntable smash deserved a high chart position, this was it.

Sadly, commercial success eluded The Bible. As the group fell apart, Boo went to Texas to record with Darden Smith. Evidence (1989, Compass re-issue 1996) confirmed Boo’s talents. He seemed equally at home collaborating with a folkie from the American South as he had been fronting a pop group from the South of England.

Returning home, Boo set out to become a solo artist. For a year, he wrote songs and played them to the diehards who remembered him as “that bloke from The Bible”. Sometimes guitarist Neill Maccoll accompanied him but often it would be Boo alone. He opened for Tori Amos and Michelle Shocked; he played countless gigs where the promoters always seemed to get his name wrong. Finally, he went into the studio to begin his first solo album.

The result was Ignorance (1992, Compass re-issue 1996). The songs ranged from the gospel-tinged Swan Silvertone to the Lennon-esque Gravity. The sound veers from the acoustic starkness of the title track to the electric swagger of History: the mood swings between the rock ’n’ roll urgency of 59 Yards and the eeriness of Little Bits Of Zero, calling at all points in between. Ignorance features guest appearances by Clive Gregson (Any Trouble, Gregson & Collister), Kimberley Rew (Katrina & The Waves) and Ray Shulman (Gentle Giant). But the star of the show is always Boo: the voice, the songs, the vision…

More touring followed. Boo opened for Richard Thompson, Loudon Wainwright III, and formed a memorable trio with Clive Gregson and Eddi Reader (Fairground Attraction). He wrote several songs for Eddi’s 1994 solo CD, one of which, Patience Of Angels scaled pop charts throughout Europe. Boo was nominated for a Novello award for Song of the Year.

Following a brief Bible re-union at the end of 1994 (which yielded one EP, Dreamlife and renewed Boo’s enthusiasm for a solo career, Boo started planning his next solo album. He made a couple of writing trips to Nashville and found himself staying across the street from a medical centre. Thus Baptist Hospital (1996) was christened.

Produced by John Wood (Nick Drake, Richard Thompson, John Martyn), the album features songs written with familiar Boo collaborators (Gregson, Reader, Maccoll) and a couple written with Gary Clark (Danny Wilson). Guest performers include most of the above plus Richard Thompson, Danny Thompson and John “Rabbit” Bundrick. Several songs employ a string section. It’s an astonishing record: Nick Hornby (best-selling author of “Fever Pitch” and “High Fidelity”) wrote: “If I could write books that sounded like this, I’d be… maybe not happy, but very, very fulfilled.” A headlining tour culminated in a sell-out London show and rave reviews.

Following the release of Baptist Hospital, Boo toured the USA (with Darden) to promote the new album and the re-issues of Evidence and Ignorance. Eddi Reader released Candyfloss & Medicine, much of which Boo wrote and played on. He toured the UK, USA and Japan as a featured member of her band.

Boo also collaborated with Neill MacColl on several film scores, including “Fever Pitch” and “Twentyfourseven” which starred Bob Hoskins and was released in the USA. In 1998, Boo returned to the studio with Eddi Reader, this time to co-produce the album Angels & Electricity, which features many of his songs.