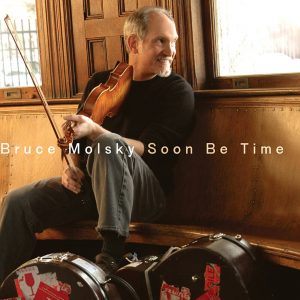 Alone or with fellow musicians; guitar, fiddle, or banjo in hand, Bruce Molsky has been exploring traditional musics from an astonishingly broad range of cultures over the past two decades — synthesizing them and refracting them through his own evolving sensibilities to the point where the sources of his inspiration transform themselves into a sound that is uniquely his. While most identified with traditional American old-time music, Molsky’s influences range from the Appalachian soul of Tommy Jarrell to Delta blues; from the haunting modal strains of Irish music to the rhythmically nimble music of Eastern Europe. His many recordings are more like snapshots — postcards home, mementos of stops along the way. Yet they say as much about where he is heading next as they do about where he’s been.

Soon Be Time is his sixth solo album, and is his most demanding, personal statement to date. The unifying element of Soon Be Time sounds simple, yet it required an immense amount of consideration and concentration. “It doesn’t make sense to consider a new project unless there’s a concept or a motivation to support it,” Molsky explains. “It’s not just about presenting a new set of tunes; there has to be something more than that. Soon Be Time is about revisiting my own musical self and wanting to make the more intimate statement.” While his past albums have featured collaborations and contributions with an array of fine musicians, this is his first truly solo venture — recorded with only his own banjo, guitar, fiddle, and soulful, inviting voice. “After some wonderful and intense style-crossing collaborations over the last few years,” he continues, “I just felt the need to revisit where I was before all that happened. I started into all of this as a solo player, and it’s still a very strong calling for me. Playing solo also allows introspection to a depth you can’t get any other way. It’s like falling deep into your own internal and very private space, and then coming out the other side with something to share.”

The constraints imposed by Soon Be Time’s mission have resulted in a set of performances which, in their spartan dignity, are among the most pure and affecting in Molsky’s remarkable career. Hailing from New York City, he followed a circuitous musical path that began with Motown and “60s pop music, through Jimi Hendrix and into the blues. Through his fascination with acoustic blues guitar, he was introduced to Doc Watson and more rural American music. “It’s easy to see blues and old-time music as separate cultural expressions,” he says, “but as soon as you scratch the surface, most of the barriers go away. There is so much blues in old-time music that it’s inescapable.” True to his word, Molsky’s own music is marked by a subtle bluesy undercurrent. Branching out from guitar to fiddle and banjo, he studied with master old-time musicians and became a familiar participant in (and frequent winner of) fiddle conventions and contests. In the process, he developed a performing style which fused the rhythmic propulsion of stringband music, the soul of the blues, a jazz-inflected harmonic sophistication, and an engagingly conversational eloquence born of many evenings in jam sessions and song swaps.

Molsky’s recordings have had a wide-ranging impact on today’s old-time scene, bringing little-heard songs to light and introducing intriguing new variations on traditional themes. As a solo artist, his 2001 release Poor Man’s Trouble received AFIM’s “Indie” award for Best Traditional Folk Recording, while his 2004 release Contented Must Be was well-received by audiences and international media alike. His collaboration with Darol Anger, Michael Doucet, and Rushad Eggleston, Fiddlers 4, was nominated for a 2002 Grammy Award. The unique pan-global group Mozaik, featuring Bruce, Andy Irvine, Donal Lunny, Nikola Parov, and Rens Van Der Zalm, released their debut album Live at the Powerhouse in 2004.

When not recording or touring with various aggregations, Molsky teaches at a number of well-known music workshops and camps, and tours regularly as a solo performer. Much of the material on Soon Be Time was first honed at his live solo performances, lending the album a distinct blend of assuredness and spontaneity. “There’s no one else to hide behind or rely on for musical support,” Bruce explains. “Every moment of making this recording was like being on the very edge of something; really liberating and kind of scary at the same time. I love that feeling, just pushing myself to that edge and losing myself in the music.”

It is music that lends itself to getting lost, to voyages. “Every piece brings me back to some place or event,” Molsky continues. He first heard the haunting “The Golden Willow Tree,” while in college in Ithaca. “I was washing dishes in the kitchen at Johnny”s Big Red Grill,” he recalls, “and listening to the folk music sessions in the bar.” The guitar-driven “Fair Thee Well Blues” entered Molsky’s repertoire when he was a teenager, via a battered Mississippi delta blues LP discovered in the back room of a record store in the Bronx. “I played that LP to death,” he reflects with a smile. Bruce’s refreshing version of the stringband warhorse “Cotton Eyed Joe” has been in his shows as an encore for years, yet he has never recorded it. “I’ve tried several times,” he explains, “but never quite nailed it. It’s a first-take tune, and I finally got a first-take that captures it.”

Molsky’s peers in the traditional music community were the source of several of Soon Be Time’s songs. “My version of “Forked Deer” is loosely based around the Kentucky fiddler Ed Haley’s ” I spent hours on the phone with John Hartford discussing and trying to figure out how Haley played, how he drew his bow and held the fiddle,” Bruce says. “I can’t play that tune without thinking of John and feeling lucky for having known him. The curiously Eastern European-tinged “Brass Band Tune” came from Andy Irvine, who explained that it was played by a state brass band in Bulgaria. “It’s never been played on the guitar to my knowledge,” Molsky explains. “I was so set on arranging the tune for guitar that I had to invent a tuning for it. 7/16 time doesn’t lend itself too well to Travis-style guitar either!”

Tucked in among the array of songs on Soon Be Time is “My Street,” a humble and immediately likeable Molsky original, finger-picked on acoustic guitar. “It takes me a very long time for my own compositions to feel complete,” he says. “I’ve just been kind of saving this one up, for the right time, right situation. It’s a pretty personal statement, and the unaccompanied format here suits it best.” The song’s loping rhythm and simple, uncluttered melody speaks of home, bringing to mind a muffled clamor of early morning humanity just as the sun rises and the neighborhood awakes for the day.

Of course, as one of the foremost old-time musicians of his generation, Molsky isn’t home very often. But as Soon Be Time so tellingly demonstrates, music can evoke a sense of place with just a few notes. “Music is empty without its foot in something and somewhere to transport the player and the listener,” Bruce reflects. “I’ve spent 50 years trying to get to that place and feel blessed just to see a glimpse of it from time to time.”