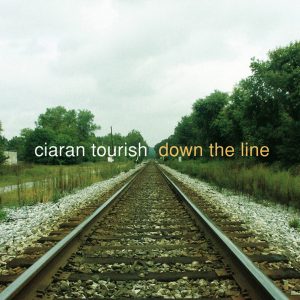 Ciarán Tourish, best known as the nimble fiddler from Altan, is one of East Donegal’s most celebrated musical exports, recognized by fellow musicians worldwide as an unusually gifted player. To be singled out amid the hotbed of traditional music that is Donegal is no small accomplishment. Tourish grew up surrounded by Irish traditional music’s best, including fiddler Dinny McLaughlin, who shared his hometown of Buncrana. If his upbringing provided plenty of competition, however, it also facilitated Tourish’s own musical development. McLaughlin began teaching the young fiddler, wooing his protégé away from an early start on the whistle, and grounding him in a mastery of the Irish dance music tradition.

Tourish, who continues to play whistle as a second instrument, is now recognized as
one of the premier contemporary Irish fiddlers, an integral member of one of Ireland’s most beloved trad supergroups. His quick ear and a love of harmony and counterpoint have also led to several collaborations on non-Altan (and even non-Irish music) projects with a wide range of musicians and singers. He has worked with the likes of Matt Molloy, Mary Black, Maura O’Connell, Martin O’Connor, Dolores Keane, De Danann, and American musicians Jerry Douglas and Tim O’Brien.

Down the Line, Tourish’s first solo album, draws on this transatlantic cast of collaborators, as well as the musical versatility of its producer/artist/arranger. Tourish showcases both his fiddle and whistle, demonstrating his ability to play them as solo melody instruments, accompanying textures, or components of a dynamic ensemble sound. The ten-song CD includes five traditional instrumentals, including one which Tourish identifies in the liner notes as “one of the first ‘big’ reels I learnt from my teacher – Dinny McLaughlin.” Tourish also features two of his own compositions, as well as three guest vocals. Tim O’Brien and Alison Krauss sing the Carter Family’s “Are You Tired of Me My Darling?” Maura O’Connell delivers the traditional “Slan Le Mhaigh,” and Paul Brady performs his own original, “Dreams Will Come.” Brady also contributes keyboard and guitar parts on several other tracks. Musicians on Down the Line include Jerry Douglas on dobro, Phil Cunningham on accordion, Neil Martin on cello, Darrell Scott and Arty McGlynn on guitar, Percy Robinson on pedal steel, Viktor Krauss on bass, Jim Higgins on percussion, and Kenny Malone on drums.