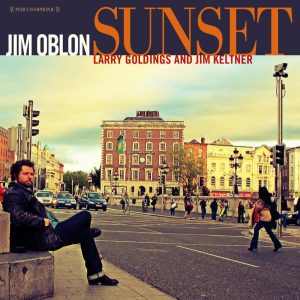 Jim Oblon is one of those rare talents—a jaw-dropping guitarist, soulful singer and compelling writer. On Sunset, to be released on March 25, Oblon’s virtuosic Telecaster-driven blues chops and vocals shine on a set of originals, vintage rock & roll, and country blues, all delivered in a neoclassic organ trio setting comprised of legendary session drummer Jim Keltner and renowned GRAMMY-winning organist/pianist Larry Goldings.

Oblon has gained national attention as guitarist, drummer, and vocalist in Paul Simon’s band as well as for his contributions on bass, drums and guitar to Simon’s latest album So Beautiful or So What. Always a believer in the bigger musical picture, he aims to expound upon the legacy of his forbearers without ever becoming an impersonator himself. “Today there’s a ‘blues scene’ with Brylcreem and bowling shirts, all the gear, but it doesn’t have the essence of music,” Oblon explains. “I wanted to honor the people who came before me. Maybe I can add a few of my own things, but I want to not lose what was.”

Sunset is a showcase for all three musicians. The album was recorded with the trio playing together in one room and the energy and intensity of this created by this performance-style recording approach yields tracks that literally seem to pop off the disc. A blues-funk reworking of Little Richard’s “Lucille” gives each of the players a chance to stretch out and strut their inventiveness, musical depth and mastery, as well as their ability to put a fresh spin on an old classic. Oblon’s soul shines on his two originals, the languid “Desert Sun” and the almost time-suspending instrumental title track, “Sunset.”  And his plaintive telecaster, backed by Keltner’s bombastic rhythm bed, lends a particularly vibey feel to Lead Belly’s “When I Was a Cowboy 1911.”

Goldings, featured on piano on “Desert Sun” and “Railroad Bum,” uses the Fats Domino classic “Blueberry Hill” to illustrate why he is considered one of the best Hammond B3 players alive; he delivers a solo that makes you think he’s been waiting his whole life to play this tune. And rock/session legend Jim Keltner’s performances stand out as almost a “Jim Keltner how-to”: propulsive yet laid-back, rocking yet swinging, and rhythmically percussive enough to make you swear there is more than one of him playing.

In 2011, Oblon released a Jim Morrison-esque recording of the traditional song “Where Did You Sleep Last Night,” which was featured in last season’s finale of HBO’s hugely popular vampire drama True Blood. He now lives in Nashville where he’s a fast rising guitarist on the session scene.  His Tuesday night residency at fooBAR in East Nashville is becoming the buzz event of the week among musicians and those in the know.