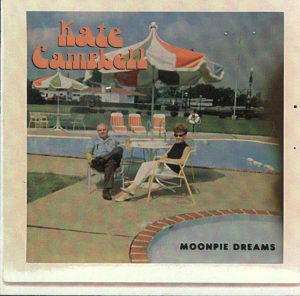 Kate Campbell has been described as one of the most literate songwriters in music today. She embraces many styles in her writing: folk, contemporary acoustic, rock, alternative country, and touches of soul and blues. CD Review wrote “(Kate Campbell) is an important voice that brings literary focus — devoid of pretension — to music that bridges the gap between country and folk”, Campbell has found a musical home in her writing that falls somewhere between Memphis and Muscle Shoals. Still moved by the experiences that shaped her as a child growing up in the South, Campbell’s music has grown to encompass every aspect of the human experience, connecting with all those who hear it and gaining her a large circle of admirers in the U.S. and around the globe.

On Rosaryville, her fourth release on Compass, Campbell reflects on the pursuit of art and devotion in everyday life. With a deep respect for where she came from, Campbell says, “Something told me I had to make sense of how I was connected to the world I came from before I could go on to connect to the world at large.” On Rosaryville, Campbell has found that worldly connection on such songs as Rosa’s Coronas where she writes about the dignity and devotion of a woman who rolls cigars for a living in Cuba. “The woman thinks about her daughter and grand-daughter who have fled their native country for America while the lector in her factory reads to her about the violence happening there.” Campbell contemplates the mysteries of life in New Orleans on the song Porcelain Blue and reflects on the changing relationships between mothers and daughters on In My Mother’s House. The album represents Campbell’s first time out as producer and features the legendary Spooner Oldham. “I’m interested in the fact that different places have their own unique traits and that the people who live there share them.”

Songs From the Levee, Campbell’s highly acclaimed debut, earned her features on Prime Time Country and NPR’s All Things Considered. In 1995, Farm Journal, the nation’s premier and most widely circulated agricultural magazine, presented her with the prestigious Farm Song of the Year award for “Bury Me in Bluegrass”. The same year, Campbell was voted Best New Artist by the listeners of Boston’s WUMB Radio, and received an Indie Award nomination for Best Singer/Songwriter from the Association for Independent Music (AFIM).

On her second solo outing Moonpie Dreams, Campbell continued to evoke a strong sense of place and timeby creating vibrantly alive characters. Moonpie Dreams received a Nashville Music Award nomination for Folk Album of the Year, was voted Country Album of the Year by MOJO Magazine, and was featured in the now legendary and critically acclaimed Southern Music Issue of the Oxford American. Both Songs from the Levee and Moonpie Dreams climbed into the Top Five.

On Visions of Plenty, Cambell’s third release, she talked about the changing Southern landscape and included themes of land, race and religion. The album was nominated for a Nashville Music Award and featured guests Emmylou Harris, Anthony Crawford, Bo Ramsey, Kevin Gordon and Spooner Oldham. It touched on such subjects as school bussing and integration (Bus 109), the civil rights movement in the turbulent 60’s (Crazy in Alabama), economic disparity (Visions of Plenty), the declining steel industry and its environmental aftermath (Deep Tang), the commercialization of religion (Jesus and Tomatoes), as well as grief and loss (Sing Me Out). The album was highly acclaimed and American Songwriter said, “this Cd is a celebration of Campbell’s unique vision”.

Campbell also saw success as a songwriter when The Nashville Bluegrass Band included her haunting song, Signs Following on their 1998 Grammy nominated album, American Beauty. Galaxy 500 was featured on NPR’s Car Talk and she was a featured songwriter in the book, Solo, along with Sheryl Crow, Sarah McLachlan, Shawn Colvin, Suzanne Vega, Jewel and others.

Rosaryville is an album that is destined to catapult Kate Campbell into the realm of great Southern writers. “I’m going to write songs no matter what. Whether I’m making records or not. It doesn’t matter whether the people who listen are from Mississippi or that they’ve even seen Mississippi. I’ve had people in England who say, “I’ve never been to Mississipi but I know what it’s like from your songs. When I get that kind of response, I’m completely gratified. That’s what art and humanity is all about — making that connection.”