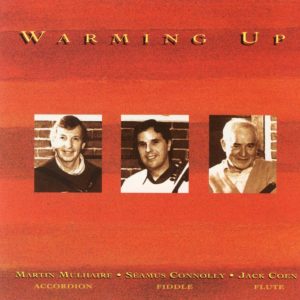 Killaloe, Co. Clare, fiddler Seamus Connolly, is the most successful solo competitor in the history of the All-Ireland Championships, winning an unprecedented ten fiddle titles. As a boy, Connolly traveled Ireland, learning from the topmost legends of Irish music, including Willie Clancy, P.J. Hayes, Padraig O’Keeffe, and Junior Crehan among others. As a youth,Connolly rose to national fame through Irish radio and television, and lateras a member of the Kilfenora and Leitrim Ceili Bands.

As member of the first Comhaltas Ceoltóirí Eireann (CCE) tour, Connolly visited the US for the first time in 1972. A few years later, he immigrated to Boston and taught at the local CCE branch, where his students flourished; going on to win the same awards he captured 25 years before. Connolly has represented Ireland on three “National Council for the Traditional Arts” tours, performed on the nationally broadcast NPR series “Folk Masters,” and has even played on the “Today Show.”

Highly involved with Boston College, the “Sullivan Artist in Residence,” directed the Gaelic Roots Summer School and Festival there from 1993 – 2003 and has since organized the Gaelic Roots Series of free concerts/lectures by visiting artists throughout the academic year. With Larry Reynolds, Connolly initiated, produced and co-hosted CCE’s ongoing weekly radio program of traditional Irish music.

Named the 2002 “Traditional Musician of the Year” by The Irish Echo, Connolly was subsequently inducted into the Comhaltas Ceoltoiri Eireann Hall of Fame.

His recordings include his two solo CDs and a trio with Green Linnet/Tayberry Records:Notes from My Mind and Here and There, and Banks of the Shannon, as well as the album Warming Up, with accordionist/composer Martin Mulhaire, flutist Jack Coen and pianist Felix Dolan. Connolly released The Boston Edge with Joe Derrane and John McGann, and later produced a book of tunes with two accompanying CDs with colleague Laurel Martin, Forget Me Not: A Collection of 50 Memorable Traditional Irish Tunes (Mel Bay Publications, 2004). As of 2009, Seamus was working on a book of tunes with recordings of over 300 new and rare compositions to be released at a later date.

Eyrecourt, Galway-born button accordionist and composer Martin Mulhaire was, like many of the great Irish musicians, born into a highly musical family. Mulhaire’s father was a fiddler and whistle player, and though Mulhaire began on the fiddle, he found his love for the accordion at the age of fourteen. Largely self-taught through recordings and listening to friends, Mulhaire eventually went on to win All-Irelands in the 1950s.

In 1958, Mulhaire visted the U.S. with The Tulla Ceili Band and “stayed on.” Mulhaire’s album Warming Up (Green Linnet, 2006), features seven of his compositions, and many of his tunes have found their way into session on both sides of the pond.

Born in 1925 in Co. Galway, flautist, teacher, and flutemaker Jack Coen began his musical instruction on the tin whistle, graduating to the fife, and then to the wooden flute by young adulthood. In 1949, Coen moved to the US with the intention of returning soon to Ireland. However, once immersed in New England’s Irish music scene in the late 1950s, he became attached and joined the New York Ceili band, which won the 1960 All-Ireland championship.

In the 1970s, discouraged by his flute students’ attraction to the silver flutes, Coen began to carve wooden flutes for them, determined to keep the tradition alive.