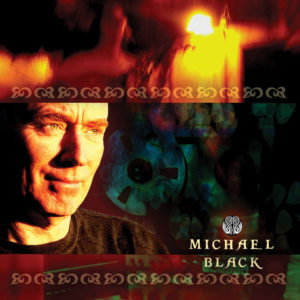 Michael Black’s self titled album includes a music hall song from the 1930s, a traditional song sung in Irish, a ballad about war and the costs of it from New Zealand, a sea shanty, and a song to dance the baby on your knee. What makes it a cohesive whole is Black’s voice and his love of and natural ability to convey a good story.

Dublin born Michael Black grew up in a family of singers. Mother, Patty, and father, Kevin, filled their home with music and their children clearly took up that love, with all five of them following music professionally at various points in their lives. Black has often performed with his brothers Shay and Martin as The Black Brothers, and he is older brother to Irish superstar Mary Black and top solo artist Frances Black. All five have also recorded three albums together as The Black Family.

“The music’s in my blood, you know, I don’t think there’s anything I can do about it,” he reflects, laughing. With a doctorate in sociology, Black has taught at the university level in San Francisco where he now lives but, “really, my job is a dad. I have three small kids, three girls. My wife works a professional career, and when they came along we made the decision that I’d care for them. I’ve been a teacher, been around kids all my life, so it was a natural decision.” With his daughters growing up, it was time to turn more of his attention to his music. One of the results is his first solo album.

Each of his siblings add vocals to various cuts on this collection, but it is very much Black’s voice, style, and ideas which are the driving force of the album. There’s his ebullient sense of humor on “My Father Loves Nikita Kruschev”, the lively trip he leads around Irish tradition, fun and landscape with “Little Pack of Tailors” / “I’ve Got a Toothache”, a thought provoking look at a soldier’s choice in “The Deserter”, and a heartfelt ballad of the coal miner”s life on “The Coming of the Roads”. “Celt’s very representative of what I do when I’m performing,” Black says. I don’t stick to just that one genre of traditional Irish music, I select from things that suit me and that I like. I needed to make an identity for myself,” he says. “People would say well, we know the name, but we don’t know you. And I wanted to make something I was proud of musically.” To that end, he recruited producer John Doyle, “and I was really lucky. John’s a great guitarist, and a great producer, he’s got a really quick ear, and he understands acoustic music.”

The family pitched in to add outstanding harmonies to the tracks, too. Black’s brothers and sisters Shay, Martin, Mary and Frances all sat in, as did members of the next generation of the Black family, including rising pop star Danny O’Reilly and up and coming singers Eoghan Scott and Roisin O’Reilly. “They’re even more amazing singers than we are,” Black says. “All the family can sing, so why not have them all along?” he adds with chuckle. In addition to John Doyle on guitar and bouzouki, others who support Black on the recording include fiddlers Liz Carroll and Liz Knowles, Solas’ Seamus Egan on whistles, Chico Huff on bass and Dirk Powell on piano.

It’s Michael Black’s voice and influences that hold the center around which these voices and instruments work. Being Irish is part of who he is musically, and he incorporates that into his music always “but I don’t stick to just one genre,” he says. “I’m rooted in roots music, music of the people.” His beloved roots music, from Appalachian ballads to Irish jigs to songs of reflection, is what’s celebrated on this recording. “I’m singing this stuff, and people are enjoying it. This is what I do. This is what I sing.”