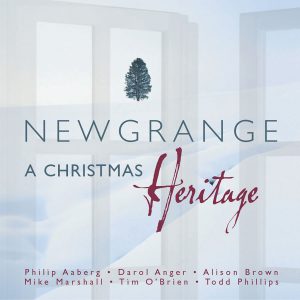 NewGrange is the quintessential Americana band. These six celebrated acoustic music veterans take the listener into the heart of American folk music, the common ground from which jazz, blues and country music emerged. By looking backward to move forward, NewGrange has created a completely unique band sound. They pay homage to the roots of American music while delivering a sophisticated, contemporary take on the string band. No other group has been as successful at combining traditional stringed instruments with piano and creating such a cohesive texture.

With the 2007 release of A Christmas Heritage on Compass Records, these six giants of acoustic music come together to explore musical holiday traditions at the roots of Americana. This collaboration is a seasonal recording unlike any other, featuring traditional holiday music from Ireland, France, and Eastern Europe woven together with Americana and Gospel repertoire. A Christmas Heritage digs deep to explore the full diversity of the American Christmas season.

From the first strains of Mike Marshall’s solo fingerstyle guitar on ’Greensleeves’ through Tim O’Brien’s spirited blues reading of ’Go Tell It on the Mountain,’ this all-star acoustic ensemble offers a variety of lush soundscapes, fresh takes on venerable chestnuts, and some surprising new additions to the holiday canon. Alison Brown’s five-string klezmer banjo breaks fresh ground in a medley with a fiddle trio led by Darol Anger on “Shalom Aleichem/Breakin’ Up Christmas.” Pianist Philip Aaberg leads the group through an extended romp on “Christmas Eve,” and bassist Todd Phillips provides the impeccable underpinnings for the sextet’s flights of fancy.

Imaginative, whimsical, and at times contemplative, this collection is a welcome addition to the Christmas music library.

NewGrange was born on the road. In 1998, Mike Marshall and Darol Anger assembled their personal “dream team” of acoustic musicians for a 22-city holiday season concert tour. The performances drew raves, as did the group’s recording: more than anything, audiences and critics responded to how well the band played together. Probably no one was more delighted than the band itself. Mike Marshall explained, “I was ready for anything when we decided on the players. I thought, ’Well, this is going to be really great or really horrible.’ I was amazed at just how easily these musicians worked together.”

The series of concerts was such an exciting musical experience that the six members decided to transform NewGrange from a one-off touring ensemble into a band. In the spring of 1999, they reconvened in San Francisco and recorded a self-titled album. Though the members of New Grange maintain busy schedules as solo artists, session players, and music business executives, their work together is clearly something special, the sort of innovation that inspires new directions in music.

“It’s exciting to me to think where this style is going,” Mike Marshall said following the release of NewGrange’s self-title. “I’m most excited by the initial impulse that creates a new form. Earl Scruggs, or Bill Monroe, what was going on in their heads at the moment they created those styles? What music were they aware of? What did they want to bring out?”

It should come as no surprise that NewGrange has ventured off the beaten path. All six members of the group are musical innovators as well as instrumental virtuosi. “Darol Anger and Todd Phillips were in the original David Grisman Quartet,” bandmate Alison Brown notes, adding, “That band was the beginning of new acoustic music. I can’t imagine what acoustic instrumental music would be like without these innovations and these innovators. These guys took it to a whole new place.” Brown herself has made a distinctive mark on acoustic music both as a genre-bending, jazz-savvy banjo player/composer and as the president of Compass Records. Mike Marshall, another former member of the Grisman band, has moved beyond American roots and jazz to explore Latin and classical styles, playing mandolin, guitar and violin with everyone from Bela Fleck to Stephane Grappelli to MacArthur Fellowship winner Edgar Meyer. Tim O’Brien, a singer/songwriter whose material has been covered by the likes of the Dixie Chicks, Garth Brooks, and Kathy Mattea, was an early, steadfast exponent of the country/bluegrass/roots-rock fusion now known as Americana. Philip Aaberg, perhaps the boldest choice for the group, has lent his talents as a pianist and composer to a variety of projects, classical to country, jazz to rock. His credits include recordings and performances with the Boston Pops, Peter Gabriel, Elvin Bishop, and John Hiatt.

However, NewGrange not only draws on the innovative style of each of its members: it pushes each musician to extend their creativity even further. “I think they challenged me, pushed me to try new tonalities and stretch a bit,” said Tim O’Brien of his bandmates following the group’s second recording. Brown agreed. “It really is an inspiration to play with these guys, who are some of the giants of modern acoustic music.”

The name of the group reflects the combination of spontaneity, inspiration, and discipline the six-person ensemble generates. “There’s a place in Ireland called Newgrange, and Tim wrote a song about it for our Christmas record,” explained bass player Todd Phillips. “It’s a place where the people of an ancient civilization built this structure so the light would shine through it on the winter solstice kinda like a ’Raiders of the Lost Ark’ sort of thing where you have to stand there and wait for the sun to shine through at just the right time.”