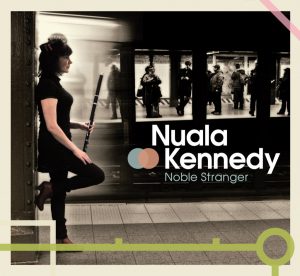 Nuala Kennedy is a celebrated traditional Irish musician and internationally acclaimed flute player and singer. Touted as “spellbinding” and “a delight,” by the Irish Times, her live performances over the last few years inspired her return to the studio to record Noble Stranger (Compass, avail Aug. 28), a road-tested collection of innovative originals and traditional songs recorded with her touring band. Kennedy uses her traditional music background as a springboard for the new album which offers a 12 song set on which her adventurous instrumentation and progressive instrumentation shine.

Noble Stranger was recorded over a week in the beautiful rolling hills near Biggar, a little town nestled between Edinburgh and Glasgow by Kennedy, her percussionist Donald Hay, 10-string mandolinist Iain Macleod, guitarist Mike Bryan and guest vocalist AJ Roach. Their stage camaraderie translated seamlessly to the studio and this third album is a natural byproduct of their energetic and spontaneous live shows. “The tracks were laid down live, all together, with generally sparse overdubs. The band has been touring together for so long that there’s no other way I could imagine having made Noble Stranger,” comments Kennedy. “The whole album is a real reflection of our live sound.”

Accompanied by the spirited interplay between Bryan’s guitar and Macleod’s mandolin and supported by the tasteful percussion of Hays, tracks on the album intimately connect Kennedy’s own interests in traditional music and her neo-folk composition style. “Spending time in America has given me a greater appreciation of my own traditional musical heritage, and this renewed appreciation is reflected in the choices of some of the older material on the album. Classic traditional songs such as “My Bonny Labouring Boy” and the bonus track “Matt Hyland” are songs I have known for a long time and they seemed to re-emerge as a natural part of this record.” Not all is tradition here, a vintage Casio keyboard given to Kennedy by Norman Blake of the Glasgow band Teenage Fanclub inspired several album tracks, including the light and groovy album opening “Gabriel Sings.” “I was immediately drawn to the simplicity and transportability of the instrument and it strongly influenced the direction of the arrangements.”

Kennedy has recently been calling New York City a home-away-from-home, absorbing and contributing to the City’s growing neo-folk scene. She was raised playing and singing traditional music on the East coast of Ireland – an artistic area steeped in mythology with long historical ties to Scotland. Captivated by the traditional Irish and Scottish repertoire, she went on to study at the Edinburgh College of Art, mentored under fellow Irish expatriate Cathal McConnell and formed her first trio with guitarist Kris Drever and fiddler Anna-Wendy Stevenson and released two critically acclaimed albums. Her first two solo albums, The New Shoes and Tune In, were released through Nashville-based roots music company Compass Records Group and were universally well received. She has performed and recorded with Will Oldham (Bonnie ‘Prince’ Billy), Norman Blake (Teenage Fanclub), Norwegian musicians Frode Haltli and Vegar Vårdal as well as the late Canadian composer Oliver Schroer. Kennedy is also a member of the traditional music group Oirialla performing music of her native North-East area of Ireland alongside Gerry ‘fiddle’ O’ Connor and Martin Quinn and she holds a Masters Degree in Music Performance and Composition from Newcastle University.

“Noble Stranger, you have ventured to me from the land of your fathers,” sings Kennedy on Noble Stranger‘s final track “Napoleon’s Dream,” a sentiment that reflects the underlying theme of the album. In joining the burgeoning New York folk music scene, she has also imported her distinct virtuosity and strong sense of traditional Irish identity—an identity that, inspired by her many influences, continues to evolve and define new boundaries for her tradition.