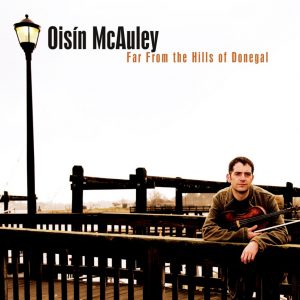 On his debut solo album entitled Far From the Hills of Donegal, Oisin McAuley embraces the opportunity to express musical ideas in a manner that reflects his highly individual and progressive style of fiddle playing. “You’ll probably hear a lot of stuff that is not very traditional, that reaches a bit beyond that,” says McAuley, who has been a member of the award-winning band Danú since 2001. “Danu is known for being a traditional band, but playing music that reaches out from the traditional has been part of my life for a long time, longer than I’ve been with Danú.”

This collection of songs shows McAuley’s approach to tradition is an eclectic one. It begins with the many flavors of Donegal music, moving through Sligo to Brittany to Quebec, and back to Western Ireland. McAuley infuses his traditional musical styling with jazz, bluegrass, and classical.

McAuley grew up in a quiet, rural part of Western Ireland, speaking Irish as his primary language and honing his craft in the wide-ranging and experimental style of famed fiddle player John Doherty. “You’ll hear a lot of John Doherty on this record, both his music and his style,” McAuley says. “He mixed up and changed things a lot, so in a way it was easier for me to mix up different types of tunes.” On this project that mix includes Port Na Bpucai (or Tune of the Fairies), a piece that reaches back into the tradition, Swing and Tears from Breton composer and guitarist Gille Le Bigot, and a set including Paddy Fahey’s My Former Life/Paidin O’ Raifertaigh/The Rumors of a Dart. The last tune is McAuley’s own composition, as are several other pieces on the disc. “The Scottish or Irish tunes that you hear on there are ones that I’d picked up along the way, that are special to me, and ones that I hadn’t heard many other people play, except for the people they came from. I wanted to include some tunes that I had composed myself, too. That’s something I love to do,” McAuley says.

McAuley has been involved with music from an early age, starting with the fiddle when he was nine and living in Carrick County, Donegal. “My grandfather played the fiddle, and he’d often give bed and board to fiddlers, just to hear tunes in the house,” he recalled. Traditional music took a back seat to classical when McAuley moved to Belfast to earn a music degree at Queen’s University, and followed that with a series of gigs (including time with Cran and Stockton’s Wing), some teaching, and a year in Brittany playing with a band and learning tunes before later going on to join Danu. McAuley is now based in Boston, where the sounds and rhythms of bluegrass and newgrass, as well as his love for jazz, attract his ear and his interest in discovering new sounds. “I can never get enough tunes. I love Charlie Parker and Bill Evans and newgrass, too.”

McAuley is rooted and grounded in the West Ireland musical tradition, a tradition that is known for taking influences from other lands and building upon them. For McAuley, reaching beyond traditional Irish music is as much a part of preserving tradition as well as extending it. “There’s no doubt that part of me comes through,” he says. “And it was a great for me to get my ideas down the way I wanted to. It was very freeing for me.” Far From the Hills of Donegal