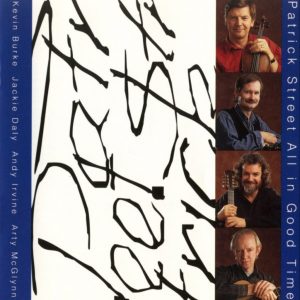 “Veterans of Planxty, the Bothy Band, De Dannan and more, Patrick Street represents the distillation of a crucial new strain that emerged in traditional Irish music some twenty-five years ago.” – Tim O’Brien

Kevin Burke, Andy Irvine, Jackie Daly and Ged Foley – collectively known as Patrick Street – are known throughout the Irish music world as four of its most brilliant players. On a repertoire steeped in traditional music, the band’s tightly executed arrangements and unparalleled musicianship know no equal. Beginning as a one-time tour of four recognized masters, nearly two decades and eight albums later this “supergroup” has reached legendary status. “Mesmerizing,” says Billboard, “…a must for those who love Irish music.”

Patrick Street adds a new lane this year with the addition of multi-instrumentalist John Carty. Known for his sensational fiddling, John will add double fiddle with Kevin as well as exciting variety to the band with his talents on banjo, flute and tenor-guitar.

Patrick Street was launched in 1986 as a one-off tour de force called Legends of Irish Music. Living up to its name, it featured fiddler Kevin Burke (veteran of The Bothy Band), singer/bouzouki player Andy Irvine (Planxty), and accordion player Jackie Daly (De Dannan), along with acclaimed guitarist Arty McGlynn. With the success of the tour, the quartet released an album that year named Patrick Street (after a road or avenue found in towns across Ireland) and a band was born. The line-up of Burke, Irvine and Daly has remained constant through the years, with other distinctive artists passing through the ranks including guitarist Gerry O’Beirne, fiddler James Kelly, and uilleann piper Declan Masterson. Ged Foley, a highly-skilled guitarist from England with past stints in the Battlefield Band and House Band, came on board in 1996. This year the Street widens it’s talents with John Carty.

The consummate Irish fiddler, Kevin has given to the band’s sound and repertoire the highly ornamented Sligo style for which he’s known. Jackie brings his wide repertoire of Kerry music to the fore with dazzling slides and polkas, and his seamless accordion-and-fiddle duets with Kevin are a highlight of the band’s shows. Andy Irvine is one of the great balladeers of Irish music, and his bouzouki playing has long been a standard by which others are judged. He brings his shared passions for Eastern European rhythms and American folksinger Woody Guthrie to the band. Ged’s inventive guitar licks provide ideal underpinning for Andy’s intricate songs and the group’s blistering sets of reels and jigs. With new recruit John Carty, Patrick Street brims with the spirit and sensitivity of Irish music at its best.

Kevin Burke was born in London, England to Irish parents who came originally from Sligo, an area renowned for its traditional music, particularly that of the fiddle. As a teenager he played in music clubs throughout England and Ireland, but in 1972 a chance meeting with Arlo Guthrie brought him to the USA to play on Arlo’s album, Last Of The Brooklyn Cowboys. At Christy Moore’s beckoning, Kevin moved for a period to Ireland to join what would become one of the most influential Irish groups of the 1970s, The Bothy Band. After the band’s breakup, he recorded two classic duo albums and toured with Bothy Band guitarist Míchéal O’Domhnaill. He is also a member of The Celtic Fiddle Festival. In 2002, Kevin was awarded a National Heritage Fellowship from the National Endowment for the Arts. “My style is a definite composite,” he says. “The old Sligo players provided the building blocks but I’ve borrowed bits and pieces from all sorts of musicians along the way.” Kevin now makes Portland, OR his home.

Andy Irvine is one of the great Irish singers, his voice one of a handful of truly great ones that gets to the very soul of Ireland. He was a member of two other groundbreaking groups, Sweeney’s Men and Planxty (which has recently reformed), and has worked closely with Paul Brady. Album collaborations include work with the likes of De Danann, Maddy Prior, June Tabor and Dick Gaughan. If his voice explores an aching Irish romanticism, his sprightly bouzouki playing has brought a Balkan edge to his musical collaborations. Andy was one of the first to bring bouzouki and Bulgarian music to the Irish tradition. His collaborative album ’East Wind’ with Riverdance composer Bill Whelan featured Hungarian singer Marta Sebestyen. His latest project is the group Mozaik with Donal Lunny, Bruce Molsky, Nikola Parov and Rens van der Zalm.

Jackie Daly comes from North Cork and plays in the style of Sliabh Luachra, the area bordering Kerry and North Cork and encompassing such towns as Castleisland and Jackie’s home, Kanturk. Sliabh Luachra is a regional musical style known for its lively slides and lovely, spirited polkas, of which Jackie is a master. He was a member of the famous Irish group De Dannan and has toured or recorded with the likes of Dolores Keane, Buttons And Bows, Kevin Burke (as a duo), John Faulkner and Seamus Creagh.

Ged (pronounced “Jed”) was born in County Durham in the North East of England. Ged is a superb guitarist, a singer of distinction with a spare, unornamented style and a player of both the fiddle and the Northumbrian smallpipes. A one-time member of Scotland’s The Battlefield Band and a founding member of The House Band, Ged also worked in a duo with the excellent English singer/songwriter Jez Lowe. He replaced original Patrick Street member Arty McGlynn in 1996, and joined the Celtic Fiddle Festival after an initial tour with the band in 2001. He lives in the USA.

Born in London, England and now residing in Co. Roscommon, Ireland, John plays in the Roscommon and Sligo styles of his family roots. He was recently named Traditional Musician of the Year for 2003 by Irish Television TG4. He has released a number of well-regarded albums and also plays with his band At the Racket.

“With the relaxed grace of masters, Patrick Street use their breathtaking virtuosity to display this ancient music at its wild and humble best.” – The Boston Globe

“With the possible exception of the Chieftains, there’s no better Celtic music group in the world right now than Patrick Street!” – The Washington Post

“Mesmerizing…a must for those who love Irish music.” – Billboard Compendium: The Best of Patrick Street