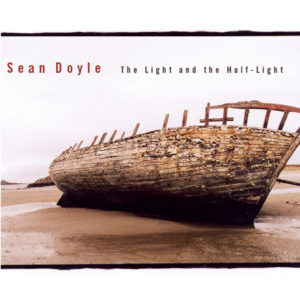 “It’s hard for me to express how I feel,” reflects Sean Doyle from his home in Sligo, Ireland. “I never thought I’d get to make this record.”

While most artists don’t make their debut album at age 58, vocalist, song collector, and retired policeman Doyle comes from an environment far removed from the mainstream music industry. A member of a large and deeply musical family, he has been content to hone his craft in pubs, at fleadhs, and assorted informal gatherings over the past six decades. The thought of recording a proper album in a studio simply never occurred to him until his son, the renowned guitarist/producer/songwriter John Doyle, suggested it.

“John browbeat me into it,” the elder Doyle states, matter-of-factly. “When John was doing his first record [2001’s Evening Comes Early], I came in and did one track. It seemed to go well and a lot of people liked it. I wasn’t that keen on doing my own album really, but he kept at it.” So began the saga of what eventually became The Light and the Half-Light.

“Doing my record was Dad’s first experience in the studio,” says John Doyle. “From then, I really had to stay on him and push him to make this record. But I feel it’s important: I grew up hearing him sing, he’s given me so much in terms of my music. And no one does what he does musically.”

What he does is mine a very narrow vein of song, a melodic strain that exists at the intersection of Irish, English, and Scottish traditions. “It’s in between English ballad singing and Irish sean nos,” explains John. “Dad likes that gap – he sings a lot of Irish songs that have been translated into English.”

Decades of performing in pubs and other noisy, informal environments has given Sean Doyle an edge that many of today’s concert-hall-bred musicians lack. “A pub doesn’t get completely quiet,” Sean explains, “so you need a strong voice to make yourself heard. You learn to project, to be assertive.”

While marked by an unapologetic boldness, Doyle’s singing never seems blustery or bathetic. Doyle achieves this by balancing his strong, deep voice with a disarming tenderness and keen sense for a song’s unfolding drama.
“Dad’s music is serious drama,” notes John. “It all comes down to how he relates to songs. He thinks of them not as music, but as stories. This influences everything he does: his meter, his phrasing, his timing. As an instrumentalist, accompanying him on this album has been a great challenge for me.”

“I’ve never sung with anyone before,” Sean adds. The tradition he comes from is based on unaccompanied vocal performance. “Apparently I sing in the strangest keys,” he laughs. “To John’s credit, he let me do my own thing and just followed on with what needed to be done. I sung as if there wasn’t accompaniment. I didn’t change what I did at all. I’m not used to fitting in with other people.”

“Sometimes I just told him not to listen to me,” cracks John. “I just watched him and listened – I really tried to preserve everything he does.” As producer, arranger, and primary accompanist on The Light and the Half-Light, the younger Doyle succeeds exquisitely. His playing elevates the material with dashes of rhythm and harmony, and yet leaves plenty of room for his father to maneuver and express the nuances of each song.

Choosing the songs for The Light and the Half-Light was an equally demanding process for John. “We started with about forty tunes – mind you, these are all from Dad’s memory, nothing written, no notation of any kind. And we slowly started to whittle it down to a manageable number. We tried to balance the serious, sad, and more humorous tunes. And every now and then, when I thought I’d heard everything he had, he would surprise me with something I’d never known about.”

“For instance,” John elaborates, “when me and Dad and my brothers all get together, we always wind up singing. Last Christmas we started going around the room, swapping songs. This started at about seven in the evening, and wrapped up around five in the morning. That’s where I first heard dad sing ‘Let Mr. Maguire Sit Down,’ which wound up on the album.”

“I couldn’t believe they hadn’t heard that one,” responds the elder Doyle. “It was old hat to me – we were tired of it in the fifties! That Christmas I started to discover how old I am!”

Born January 2, 1946, Sean Doyle – like his son John – was first introduced to music through his father. “My dad was an accordion player, and was part of a ceilidh band that would practice in the house. They’d drag me out and make me sing waltzes with them when I was small.” This opened Doyle’s young ears to singing, a pursuit further fueled by the social events in his native Sligo. “Any house dances finished with singing,” he explains. “It went around the whole assembly, and people were coerced into singing a tune apiece. When I heard a really good ballad, it affected me. I wanted to sing it myself.”

While leaving home to join the Dublin police force at age 18 (“There’s still some top secret stuff he won’t tell me about,” half-jokes John), Sean Doyle continued to pursue his interest in Irish singing through singing clubs, contests, and fleadhs. He watched with fascination and encouragement as vocal music achieved its rightful place alongside traditional instrumental music. “Singing has come up,” he says. “It was the poor second cousin to instrumental music for a long time. Now it’s on a much better footing.”

Those years of earnest apprenticeship come alive on The Light and the Half-Light. Completed over two years of intermittent sessions in Ireland; Asheville, North Carolina; and Louisiana, the album has a natural ease and dramatic flow that sounds as though it could have been recorded in one session. There is no audible trace of Sean’s initial apprehension. “We had to loosen him up a little,” says John. “The experience reminded me how artificial the studio environment is. Especially compared to the pub.” Despite the pristine fidelity, there is a beguiling intimacy throughout, especially on the album’s centerpiece “The Flying Cloud.”

“‘The Flying Cloud’ was the one song I really wanted to have on there,” says Sean. “I’m very drawn to the theme of it: an Irish sailor falling first into the awful slavery trade, then getting caught up with pirates and thieves. It’s dealt with with such intelligence and compassion. It’s a real epic.” Like all the songs on The Light and the Half-Light, it was learned the old-fashioned way, at a fleadh. “It stuck to me,” Doyle concludes. Delivered over eight chilling minutes and accompanied by gentle bouzouki chords from John, it is a mesmerizing, deeply affecting performance that finds Sean Doyle evoking the sadness and grief of the tale through expert dramatic timing and a vast dynamic range that veers from full-voice to hushed, whispered passages.

Throughout The Light and the Half-Light, the supporting music is sublime and understated. “I’m so overwhelmed with the people who played on this,” says Sean of the album’s cast, which includes Liz Carroll, John Williams, Dirk Powell, Rayna Gellert, and Kieran O’Hare. “It’s the crème de la crème of Irish music.” John Doyle’s expert hand brings it all together, paying the ultimate tribute to his greatest influence, his father.

With a masterful debut album now completed, Sean Doyle is playfully stubborn about a potential follow-up. “No second,” he laughs. “I put my foot down. I’m going back to retirement.” The Light and the Half-Light