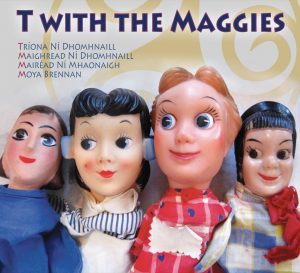 In May 2007, a remarkable gathering of traditional Irish musicians and singers came together at Vicar Street in Dublin to celebrate the life and music of Mícheál Ó Domhnaill, who, with Skara Brae and The Bothy Band, had been a pioneering force in Irish music.

Among the many artists and groups coming together that evening was an evocative performance by four of Ireland’s finest female singers. Tríona and Maighread Ní Dhomhnaill (Míchaél’s two sisters, concert organisers and co-members of Skara Brae and The Bothy Band) were joined by Mairéad Ní Mhaonaigh of Altan and Moya Brennan of Clannad.

And so was born one of the most inspirational and heartening collaborations in traditional Irish music.

Tríona, Maighread, Mairéad and Moya, T with the Maggies, all come from the same corner of County Donegal (with Gaelic as their first language) and all have illustrious career histories. Each individual brings a unique and varied interpretation of their musical heritage but the result is one of the finest ever amalgamations of Irish female voices. They are real Celtic women!

Their first show in January 2009, at the Temple Bar Tradfest in Dublin, sold out immediately and they went on to perform at last year’s Irish Global Economic summit. A new recording of their repertoire favourite, “Two Sisters”, was commissioned by Sam Shepard, for his play, Ages of the Moon.

On the stage the ‘Maggies bubble with a mixture of instinctive tone, harmony and a generous helping of laughs. Each bring their choice of songs but mould them into the group with a unique soundscape of voice, piano, fiddle and harp. You can tell that they are the best of friends.

T With The Maggies