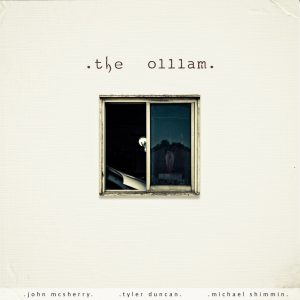 Belfast-born uilleann piper John McSherry and Detroit natives Tyler Duncan and Michael Shimmin have been dreaming of.the olllam. for the last decade. With a name inspired by the king’s own ollam bards of Irish lore, the trio wanted an ensemble that naturally represented their combined experiences in a multiplicity of styles.  McSherry, one of the best uilleann pipers in the world and a founding member of legendary Irish group Lúnasa, has been dubbed “a true master” by Irish Music Magazine and is well known for his current work with his group At First Light as well as his ’90s stint with Donal Lunny’s Coolfin.  Duncan and Shimmin have also been busy in the United States performing and recording with their award-winning Irish-jazz crossover group Millish with Duncan doing double-duty in the dance-rock group My Dear Disco/Ella Riot. It seemed that the right moment for collaboration between the three musicians would never present itself.

However, in February 2012 during the calm before the summer festival season, the trio finally wrote and recorded an original album together, overcoming the Atlantic divide by means of the internet — they rehearsed and composed live on Skype and built the tracks back and forth one part at a time between emails. The result, their eponymous debut .the olllam., available Sept. 25 on Compass Records, is lush with trance-like melodies, stunning instrumental virtuosity and a magical marriage of tradition and technology, finding the listener somewhere between Radiohead and Planxty with the ambient emotionalism of Nick Drake or Explosions in the Sky.

Simplicity is key for the trio.  They wanted their musical ideas to mature organically in a controlled environment, rather than produce anything contrived or over-composed. It is their collective sense for arrangement — Duncan (uilleann pipes, whistles, guitar, Rhodes) and Shimmin (drums and percussion) both hold degrees in jazz performance, and the legendary McSherry (uilleann pipes and whistles) has performed and written with a wide variety of artists, from Ornette Coleman to Nanci Griffith — that gives the album its distinct style and form.

The trio’s approach to composition is unique in Irish music as well, foregoing the familiar jigs and reels. “We really wanted to investigate the melodies but focus on simplicity and memorability. Everything had a purpose with no excess,” comments Duncan. “Together we created a feeling of a narrative, each song is highly personal and tells a story. There are verses, pre-choruses and bridges instead of the traditional Irish tune forms.”

These 7 adventurous instrumental tracks are fully engaging, whether the rhythm section gradually adds and builds to a powerful climax as on “the belll” or energetic eighth note bass lines interplay with Duncan’s Rhodes piano and McSherry’s catchy melody as on “the follly of wisdom.” Subtle fuzz bass guitar from guest Joe Dart and stripped-down driving percussion of Shimmin compliment the complex and beautiful tone of both McSherry and Duncan. “Conceptually we took a more pop approach but really wanted to make sure it sounded totally organic at the same time. Basically, I was thinking more as a composer and less as a drummer,” comments Shimmin.

Mysterious and masterful as the legendary ollam Irish bards from which they draw their name, McSherry, Duncan and Shimmin have discovered a synergy within their diverse musical backgrounds – introducing a new Irish crossover group rife with creative brilliance and progressive appeal.  Reflects McSherry, “I think we were all nicely surprised at how quickly and easily our ideas merged together and manifested into the music – everything seemed to fall into place right from the start. It was like we all knew instinctively that this was to be a special musical journey” 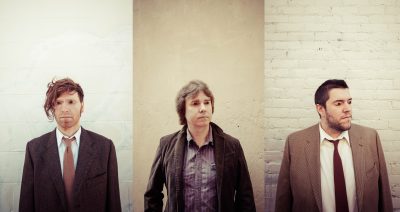