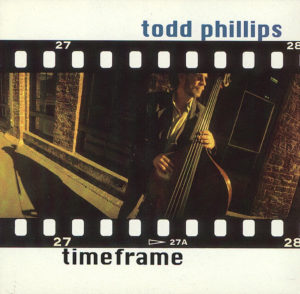 Bassist Todd Phillips’ musical pedigree is unbeatable. He staked his claim in musical history in 1975 as a member of the original Dave Grisman Quintet. He has performed and recorded with some of acoustic music’s most influential artists, including John Gorka, Montreux and Psychograss. On his latest solo album Timeframe, Phillips establishes himself as a multi-instrumentalist and composer capable of blending diverse influences into a seamless musical statement.

Phillips was born in San Jose, California in 1953. He began playing electric bass at age 11 and had his first professional studio recording experience when he was 15. Around the time that he graduated from high school he began playing the acoustic bass and developed an interest in bluegrass and jazz.

Soon afterwards, Phillips began studying with mandolinist David Grisman. This relationship quickly led to his involvement in the development of the original David Grisman Quintet. During his tenure with the group, Phillips had the opportunity to work with many well-known acoustic instrumentalists including Stephane Grappelli,Darol Anger, Mike Marshall, Tony Rice and Richard Greene. He credits the experience as having had tremendous influence on his musical growth. In particular, he says: “Spending so much time with Grisman when I was young both twisted and widened my perspectives (in a creative way) about all music.”

In 1984, Phillips recorded his first solo album Released which received critical acclaim. Billboard Magazine wrote: “Todd Phillips makes a winning new acoustic frontman.” The San Francisco Bay Guardian heralded Phillips as “one of the most meticulous and musically focused artists of the new acoustic musicmovement.” Phillips was also the 5-time recipient of the Frets Magazine readers’ poll award for Best Jazz and Bluegrass Bassist Grammy Award for his work with JD Crowe and the New South.

Throughout the 80’s and into the 90’s, Phillips continued to be involved in a variety of projects. Together with musical associates Mike Marshall and Darol Anger from the David Grisman Quintet, Phillips formed the eclectic jazzgrass group Psychograss. Theband recorded one album for Windham Hill which furthered their individual reputations as leading innovators in new acoustic music. Phillips also continued to build a successful career as a sessionmusician and appeared on dozens of recording projects including records by Alex de Grassi, Tony Rice, Jerry Douglas and Tony Trischka.

In 1991, Phillips began composing and arranging music for Timeframe.His goal was to write, arrange and record in a way that incorporated as much of what he loves about music as possible. The end result is what Phillips labels a “musical hybrid” – a sound that is at once reminiscent of the west coast “cool jazz”scene, the bachelor pad sound, and the new acoustic movement, and draws inspiration from sources as unlikely as Bill Evans,John Coltrane, Steely Dan, Joseph Haydn and Bill Monroe. Together with reed master Paul McCandless (Oregon), violinist Darol Anger (Turtle Island String Quartet), Joe Caploe on vibes and drummer Paul van Wageningen, Phillips delivers a focused and assured take on acoustic jazz which the Nashville Scene described as “music that’s both accessible and beautiful while remaining constantly surprising and fresh.”